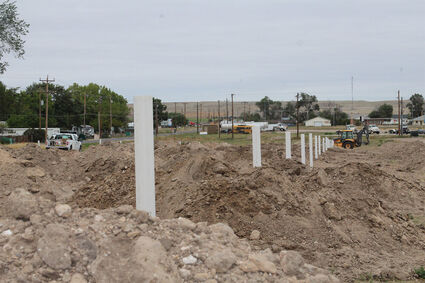 After a series of challenges and setbacks, and three years in the making, the Porters have finally pushed forward and will soon have an RV park located on the east edge of Kimball. The old Ridgewood or Boeing Trailer Park will now be known as Rook RV Park.

By next week, 34-36 sites should be ready for the "traveling workers." The infrastructure for the 34-36 sites in the park is all-new – from water to sewer to electricity. Sonny Porter did say with a chuckle, "It is a little spendy." The only part of the infrastructure still intact was the water main, and it was in pristine shape. The life expectancy of water mains is 100-150 years.

The 34-36 sites are "pretty much" spoken for now, Porter said. "There are a lot of people out there asking us how many units are going to be available."

Like everything now, the Porters are having trouble getting equipment.

Everything they have ordered comes piecemeal, a few at a time, from lots of different distributors.

Sonny's wife Kathy Porter said, "We have to go to different suppliers." She continued to explain about the heated water risers: "We have 85 on order, and we are supposed to get 25 of them in the next week or so."

The Porters have dotted all the 'I's and crossed all the 'T's. As a private park, state and city inspections are not required. Still, the Porters said they have gone above and beyond, having inspections from the water department, health department, fire marshal and state electrical engineer. And they already have their sales and lodging tax numbers.

As chairman of the Board of Public Works for the City of Kimball, Sonny Porter has made it his mission to keep everything above board and "to avoid any perception of impropriety." He said they have paid for all inspections, paid landfill fees, and hired an engineering firm to work with the town, "so our system is 100% compatible." 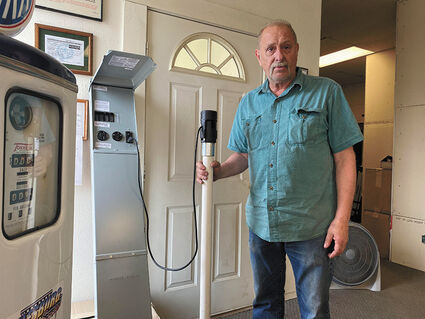 Sonny Porter holds a steel power pedestal that will be installed along with heated water risers.

The "spendy" and time-consuming project began after the Porters purchased the blighted property three years ago. They worked through the courts and foreclosures, tax liens and multiple interests in the title. Then they began locating all infrastructure and created a plan for demolition and replacement of transformers, and they located all gate mounts and fire hydrants. Sonny said, "We knew what we were taking on when we decided to do it."

The plan is to have 52 additional sites by Christmas, but a total of 130 RV sites will be available. By next summer, the Porters will have a maintenance facility including six ADA bathrooms and washers and dryers. Landscaping and a recreational building will eventually complete the RV park.

It has taken a team of Porters to get the RV park up and going. Each has their specialty.

Sonny Porter does the control, layout, set up and diagrams. Kathy does ordering, permitting and paperwork, while Gerry has literally installed the 34-36 sites, working six or seven days a week from early in the morning until dark.