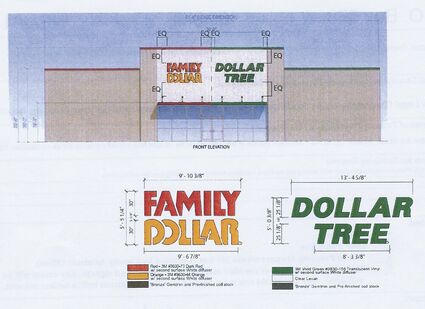 This is part of the plan that the city is reviewing for a Family Dollar / Dollar Tree combo operation along Highway 30 west.

The Kimball Planning Commission met prior to the City Council meeting last week for public hearings on rezoning and re-plating four different properties in Kimball.

The first public hearing dealt with re-plating property currently owned by Kenneth W. Adrian, but under contract to KIM5, LLC. Adrian applied for subdivision to change the current zoning from C-5 Heavy Commercial to C-2 Light Commercial. KIM5, LLC has plans to build a Family Dollar/Dollar Tree on the property located along Highway 30 just east of Wolff Automotive Center.

Sources said that property sale would be finalized this week, and plans include demolishing the former PD Dirt Moving building and removing the underground tanks. Adrian will retain the back portion of the property while the front 1.362 acres will be the site of the new combination Family Dollar/Dollar Tree.

The second public hearing was a Special Use Permit Application for Keeping Animals. Meredith Kielian recently purchased the former Cottage Gardens building, now a home, and asked for the permit to allow "10-12 cows/steers/heifers/calves to be kept for no more than 3-4 months per year control grass/weed in inaccessible areas".

The final application for rezoning was for Linda Stahla Lot 1 and the North 12 feet of Lots 2 in Lockwood Subdivision. Speaking on behalf of Stahla was her brother Bob Stahla. Her intentions are to provide RV camper spots.

The area is currently zoned Rural Resident, and Stahla was asking for it to be rezoned C-4. Both Chairman Josh Enevoldsen and member Bob Culek stated that they were concerned that C-4 rezoning would constituted "spot zoning," creating a troublesome situation.

After a lengthy discussion, the application was withdrawn, but it would be addressed at the city council meeting later in the evening. Dar Gardner did state opposition to the RV camper parking because the only entrance to her residence is a private road, called Stahla Drive, and it would conflict with the area.

The Kimball City Council met Tuesday shortly after the Planning Commission adjourned. The application for subdivision of property located at 511 West 3rdin Kimball was approved, and the rezone from C-5 Heavy Commercial to C-2 Light Commercial was also unanimously approved by the council.

After a short discussion about electric fences, barbed wire fences, and shelter requirements, the special use permit application for keeping animals at 905 East 3rd St. was approved and valid until Jan. 2023.

The council discussed Linda Stahla's application for rezoning, and once again, it was withdrawn.

Legal counsel was directed to draft an "ordinance regarding restriction to trailers/campers/motor homes parked on private property for the purpose of housing/habitation." Mayor Keith Prunty indicated this was necessary because residents were calling the city office to find out how they could put campers on their property.

Residents asked if they could rent out a space on their lawn and put the sewer drain from the camper down the storm drain. Prunty said that the storm drain goes right into Lodgepole Creek, so they are drafting an ordinance prohibiting such activity.

The council then addressed the consent agenda.

Prunty also reported to the council that the city received numerous phone calls about zoning and other questions. In addition, over the past week, 18 individuals have acquired new services through the city.