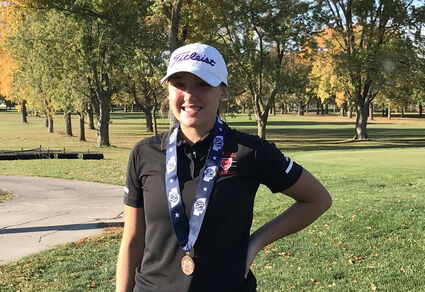 Peyton Wise wears her sixth place State medal last year, her third consecutive medal at the big dance. Now a senior, she leads a Longhorns girls golf team that opens its season next Tuesday at Sidney and aims to return to State. Wise also shot a round of 76 at District last year – a school record and her personal best.

The Kimball Longhorns 2021 fall sports seasons gets underway next Tuesday, Aug. 24, when medal winning Payton Wise and the Kimball girls golf team tee off at Sidney in their first competition since appearing at State last year.

The season picks up two days later on Aug. 26 with the cross country, volleyball and golf teams all in action.

The volleyball team debuts at 4 p.m. that day at Hemingford/Gordon, the cross country team gets off and running at Scottsbluff at 4:45 p.m., and the golfers start their day at 9 a.m. at Bayard (WTC).

Then it's time for some Friday night lights.

The Longhorns football team kicks off its season 6 p.m. Aug. 27 at Hitchcock County.