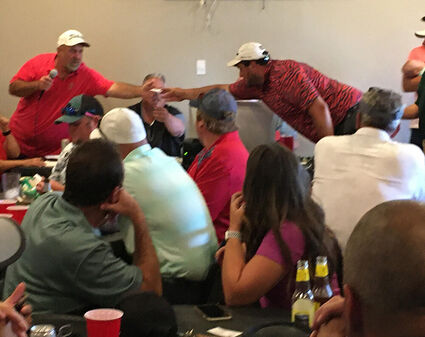 Prizes, games, food and lots of golf were on the agenda at the annual Vince's Corner ABCD Double Draw Scramble on July 10 and 11.

Winning the Skins on Saturday with a three on number 16 were the group of Ty Garrett, Jon Elwanger, Steve Linn, and Steve Pattison.

On Sunday, two teams shared the prize for the Skins with Kevin Thomas, Adam Lopez, Brandon Beck, and Gene Golding, making an eagle on the number 2 hole. Brandon Beck's drive was short of the green, then Beck took control and chipped in for their eagle.

Sharing in the Skins wins on Sunday were Jack Stafford, Kurt Kuxhausen, Mike Stafford and Clint Nelson. They also took only two strokes to put the ball in the cup on a tough number 7.

Taking home the win for the combined two-day event was the team of Nick Kuxhausen (A player), Mike Coleman (B player), Gary Monson (C player) and Dave Lukassen (D player).