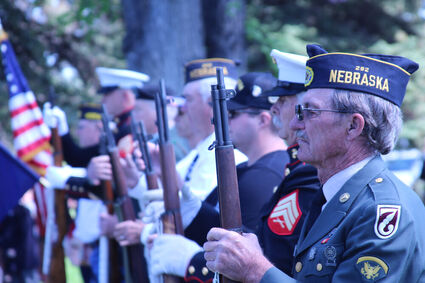 Bill Mueller, a member of the Kimball VFW post, stands at attention during the Memorial Day service at Kimball Cemetery on Monday, May 31.

On a beautiful May morning at the Kimball Cemetery, people gathered to observe Memorial Day. The ceremony began with Amy Birkhofer singing the Star-Spangled Banner.

Speaker Thomas Tudor held the crowd's attention with his memories of guarding the Tomb of the Unknown Soldier at Arlington Cemetery from 1969-70.

Drafted into the Army in 1968, Tudor was selected to go to the 3rd Infanty at Arlington, VA, where he eventually was chosen to "walk the mat." He mentioned three special memories of his time guarding the tomb.

The guards are unable to move or react except to protect the tomb. Tudor mentioned one instance when he paused, and a large bumblebee landed on his nose. For about 10 seconds, he said he felt it on his nose but then it flew off.

A second, more terrifying encounter with a wild animal came when a squirrel ran onto his foot, then crawled up his leg, inside his pants, almost to his knee, but fortunately the animal retreated. 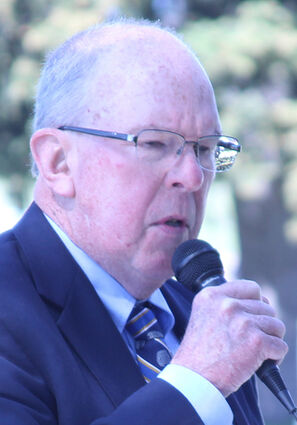 Finally, Tudor said he wanted so badly to laugh in this situation but of course could not react. A lady got pretty close to him; she was supposedly taking his picture but in fact she had the camera turned backwards at her own eye. Even though he wanted to laugh, he could not react.

The guard takes exactly 21 steps in front of the tomb and faces east for 21 seconds. He/she then turns and faces north for 21 seconds, then takes 21 steps down the mat and repeats the process. The number 21 symbolizes the highest military honor that can be shown.

Tudor is the past president of the Society of the Honor Guard, Tomb of the Unknown Soldier, and spends time educating people about the tomb on Memorial Day and Veterans Day and during talks to school groups.

The ceremony concluded with the playing of taps by Jaydin Paxton and a 21 gun salute by the Kimball VFW.