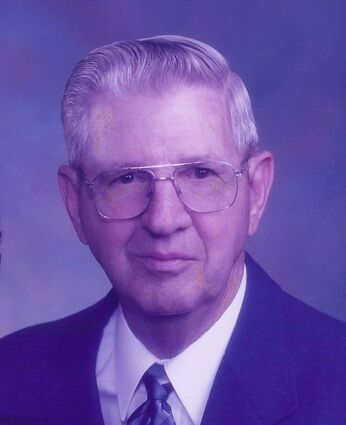 Donald D. Maxted, 91, of Kimball, died at Kimball County Manor on Friday, May 14, 2021. Funeral services for Don were held at 10:00 a.m. on Tuesday, May 18, 2021 at Trinity United Methodist Church in Kimball with Pastor Roger Gillming officiating. Burial will be held in the Kimball Cemetery with military graveside honors. Friends called at the funeral home on Monday from 1:00 until 6:00 p.m. Friends may also visit http://www.cantrellfh.com to view Don's Tribute Wall and share condolences and stories with the family.

Memorials may be given to the Trinity United Methodist Church or the Shriner's Children's Hospital. The services for Don have been entrusted to the Cantrell Funeral Home.

Donald Dean Maxted was born August 11, 1929 in Shenandoah, Iowa to Cyril Clark and Bessie Emoline (Hutchinson) Maxted. He was the youngest of five children. When he was 6 months old, the family moved to Huntley, Wyoming, where Don attended school until the second semester of his freshmen year. In 1944, the family moved to Kimball to farm. While attending Kimball High School, Don met his future wife, Joyce Vencill. Don graduated from Kimball High School in 1947.

Don enlisted in the United States Air Force in September 1948. He and Joyce were married February 4, 1949 and resided in Cheyenne, WY and Omaha, NE prior to his honorable discharge in August 1952.

Don and Joyce moved to Ree Heights, SD to farm with Don's father and brother, Merle. Their daughter, Sue Ann was born June 25, 1955 in Miller, SD. The family moved back to Kimball in August, and Don and Joyce have resided here ever since.

Don started working at the ASCS (Agricultural Stabilization and Conservation Service, Dept. of Agriculture) office in 1956. He worked as office manager for 28 years, retiring in 1984. Don was very active in the employees organization known as NASCOE, of which he was a charter member. He served on the State Board of Directors and as State President, was elected to the National Board of Directors for four years, and served as the National Professional Improvement and Awards Chairman. In 1978, he received the State and Northwest Area Distinguished Service to NASCOE awards.

In 1987, Don and Joyce, along with Jack and Joan Lockwood opened a branch office of Century 21, Bitner-Warner Realty, Inc. in Kimball. When he retired from Century 21, he continued his real estate business as Maxted Realty.

Don was a 65-year member of Trinity United Methodist Church, serving on various committees and working alongside Joyce on many projects in the church. He was also a member of the Order of DeMolay, a DeMolay Chapter Dad, a Master Mason for over 65 years (serving twice as Worshipful Master of the James L. Eatmon Lodge No.294), a Shriner in the Tehama Temple and an Associate Guardian of Job's Daughters Bethel #12. Don was a 50+ year member of the Kimball Rotary Club, a 52-year member of the American Legion and a member of the Elks Club in Scottsbluff. He served on the administrative board of Park Terrace and helped with the all-school reunions in Kimball.

He was preceded in death by his parents, brothers Thomas Lynn and Merle James (Alta), sisters Emma Josephine (Dave) Legan and Mary Louise (Soren) Sorensen, along with many members of his extended family and numerous friends.