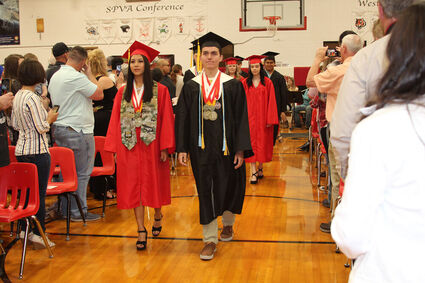 Addressing a packed gym for the Kimball High School Graduation Exercises, Principal Danielle Reader said the school was thrilled that conditions were "as normal as possible," especially considering the previous year.

Reader thanked all school personnel for everything that they did to maintain the "in-person instruction."

The Kimball High School band announced the incoming graduates with "Pomp and Circumstance," and junior Amy Birkhofer sang an impressive rendition of the Star Spangled Banner.

In addition to those three, Sydney Biesecker also graduated with honors, and Jared Barnes received an Honorary FFA award.

Addressing the class and the crowd, Johnson expressed her appreciation to the school and families for the confidence and readiness to move onto the next step in life.

Before the valedictorian address, Reader stated that Gardner had accumulated 48 college credit hours at WNCC. He described how the class had become closer.

Gardner challenged the Class of 2021 to "be the best we can be" although "success is never guaranteed." He assured the class that they could improve the world and "make a better place" even if it is just "shoveling snow for the neighbor or donation hair."

In a bit of humor, Gardner not only thanked his mom for her support but attributed his dog to much of his success. He told the audience that "it was the most stable relationship that he has had," and it was "love at first sight."

The seniors presented their parents, family and friends with flowers and a few words of appreciation. The entire class had made a strong connection with Kimball's No. 1 substitute, Mrs. Fennell, and the Presentation of Flowers line was long in order to have a few words and a hug with Mrs. Fennell.

Finally, Matthew Shoup, president of the Kimball School Board, presented the seniors with their long-awaited diplomas. Then the graduates exited the gym – holding true to their class motto: "The thing about new beginnings is that they require something else to end."