Discussions Under Way To Find Common Ground With Revised Plan 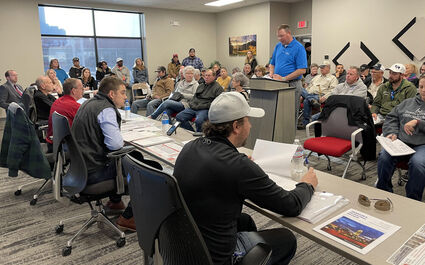 Kimball City Council members listen to a representative of MC Schaff discuss a construction bid, while members of the community wait for the Ridgewood Trailer Park rezoning topic to appear on the agenda.

On Monday, following the April 20 Kimball City Council meeting, Mayor Keith Prunty said he was "very pleased with the courtesy shown by everyone" regarding a proposal to rezone Ridgewood Trailer Park.

He said that with a positive attitude like that, "things can be accomplished."

The council had directed the Porters, the project developers, and city officials to work together and look for some common ground for revamping the old Ridgewood Trailer Park.

Prunty said the plans have been revised and a meeting between city officials and the Porters should take place later this week to solidify...