STILL BOWLING THEM OVER 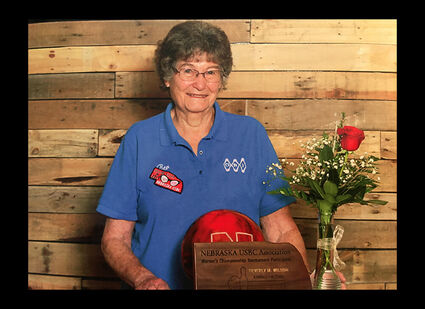 Friendly and entertaining, Kimball resident Bev Wilson laughs and chuckles when she tells stories about her 60 years of attending the state bowling tournament.

On March 29, Bev Wilson, 88 was presented an award that less than five women bowlers in the state have achieved. Bev has attended and participated in 60 state bowling tournaments.

Bev bowled in leagues on Monday, Tuesday, Wednesday, and Friday; also, she bowled on two travel leagues and two mixed leagues. "I did a lot of bowling", she laughed. She started with a 120 average in the mid-1950s, peaked in her prime with a 183 average, and still carries a 150 average today.

Although still bowling regularly on Tuesday for George Risk Industries, Bev said that she told herself, "The minute I can't walk up there straight and throw the ball, it is time for me to quit. But I can still do it."

Bev admits she is hard of hearing, blind in one eye, and has nerve nephropathy in her legs, but that doesn't stop her from doing the thing she enjoys, bowling.

She claims, "This is my last year of bowling." But in another breath, she said that even if she moves to Colorado where her son lives, that she can still get a Nebraska card and bowl in the state tournament.

"Because they use last year's tournament average and it is a scratch tournament, I would be eligible," she said.

"It has been quite a journey; whether I bowl bad or good, I still enjoy it," she continued. "I am the only one still bowling that started when the bowling alley opening up in 1957 in Kimball."

She has a box of pictures, articles and mementos, which provide her a lot of pleasure to look through.

"I've got a lot of stuff," she said. "These things don't mean anything to anybody but me."

In true Bev Wilson style, she said, "It looks like that is all my life consisted of was bowling. Yeah what else did I do besides bowl?" Then she reminded herself that she rodeoed in Pine Bluffs, played golf, and of course raised her family.

A stickler for the rules and bowling courtesy, Bev has been a certified bowling instructor, a district officer, a state officer, and a winner of the Opal Wahl award for outstanding local association secretary. When attending the state bowling tournaments, Bev had two goals: to win the Opal Wahl award and her second goal was to bowl a 700 series. Bev accomplished both of her goals, serving 17 years as city secretary and bowling a 727 high series.

Bev Wilson is a true gem to Kimball and the bowling world.