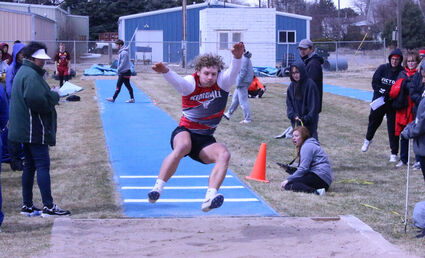 Kimball's Christian Allen-Van Pelt placed second in the triple jump and fourth in the long jump at the Morrill Early Bird.

Kimball's Longhorn track and field teams had to cancel the Kimball Invitational due to weather last weekend, but the team was still able to travel Saturday to compete in the Early Bird Meet at Morrill High School.

The girls team placed third overall, while the boys team tied for ninth at the end of the day's competition. The girls finished with 63 points – just five behind champion Crawford and four behind runner-up Bayard.

Medal winners for the girls included: