Meat Eaters Have Their Day In Kimball 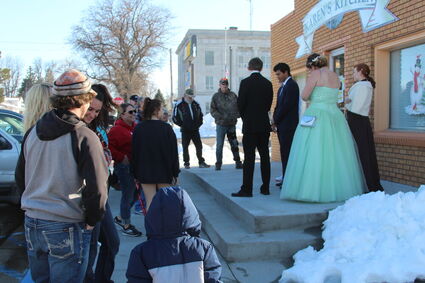 A group of meat eaters, including Potter-Dix prom attendees, form a line in front of Karen's Kitchen in Kimball on Saturday, which was designated Meat on the Menu Day in Nebraska. EH Ranch, LLC (the Halsteads) celebrated and promoted the day by purchasing the first 20 prime rib dinners at Karen's Kitchen.

Locally, Mark and Bryce Halstead from the EH Ranch, LLC approached Karen Hewitt of Karen's Kitchen in Kimball to promote "Meat on the Menu Day." They said that they wanted to purchase the first 20 prime ribs on Saturday at her restaurant to "support the beef industry and her business."

Karen said the customers appreciated it, and it "went great." She said that she cooked four prime ribs and only had four end pieces left.

Karen did mention that another beef employer purchased 40 meals for their employees to support "Meat on the Menu Day."

March 20 was designated as "Meat on the Menu Day" in Nebraska by Gov. Pete Ricketts. Nebraskans were encouraged to purchase and eat beef, pork, chicken, lamb, or any other kind of meat.

Ricketts said, "Agriculture is Nebraska's number one industry, and beef is our largest segment of production.

"While meat is one of the most nutrient-dense foods you can eat, there are radical anti-agriculture activists that are working to end meat production and our way of life here in Nebraska. I have designated March 20th as 'Meat on the Menu Day' to highlight the importance of meat in a good diet as well as to provide an opportunity to support our farmers and ranchers."