NOW THAT WAS A STORM

18-20 Inches Of Snow Do A Number On Kimball County 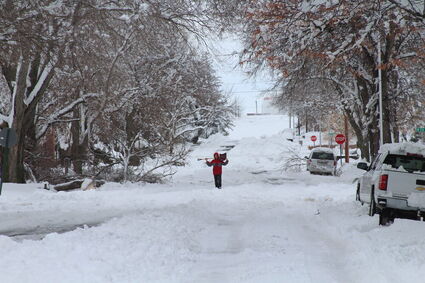 A young entrepreneur, Jacob Chavez, heads down Howard Street in search of work on Monday morning after the 18-20 inches of snow that hit the Kimball area.

The National Weather Service in Cheyenne reported that Kimball received totals of between 18-20 inches of snow on Saturday and Sunday. Cheyenne received 30.8 inches of snow during the same period, which, when melted, proved to be 3 inches of moisture in the Cheyenne area.

Region 21 Emergency Management Director Ron Leal said his concerns during the storm were Deuel and Kimball counties. He reported that vehicles went around the barricades at Big Springs and were stranded, causing some problems. According to his information, I-80 in Kimball County was closed early enough that no one was left on the roadway, but the snow totals in Kimball County caused concern for power outages.

Power outages create trouble for people using an oxygen concentrator. Leal cautioned individuals on oxygen to make sure they have backup oxygen bottles at all times because if their electricity goes off, they will need to use those backup bottles.

High West Energy did have scattered outages, according to Marketing and Communications Manager Jim East. At one point during the storm, 3,000 High West Energy customers were out of power. By 4 p.m. Monday, 241 in the Kimball area were still out. In Laramie County, about 200 were still without power, and 100 in Weld County were still waiting for their power to come back on.

East said that they are having a hard time getting to some areas because the roads are impassable or they need snow plows to lead them. High West Energy has had lots of citizens with tractors and plows who have helped clear roads. Most of the outages were a result of storm damage.

Kimball City Clerk Annette Brower explained that all the outages within the city were a result of tree branches hitting or laying on the electric lines and, therefore, disrupting service.

"Due to the amount of snow and the conditions involved, it took both the streets crew and electric crew to respond to outages," Brower said. "Our streets department was clearing roads and alleyways for the electric crew to be able to reach the damage, to cut trees away, and repair lines where needed."

The city of Kimball has all available equipment and human resources moving snow. The sheer volume and weight of the snow are overwhelming, according to Brower, and they are working as quickly as possible and appreciate everyone's understanding and patience.