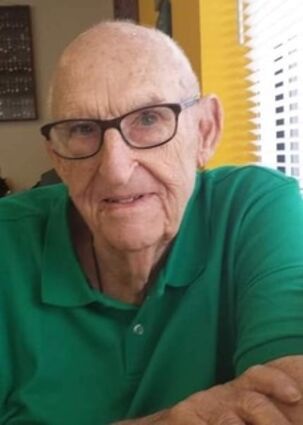 William (Bill) Henry Hotes was born October 30, 1929, on the family farm near Bloomfield, Nebraska, the eldest son of Henry Herman Hotes and Doris Alice Scheele. He departed this life to join his Lord on February 2, 2021, at the age of 91.

When Bill was 2 years old, he moved with his parents to Potter, Nebraska. After his father died in 1936, he and his mother moved to Kimball County, Nebraska, where he lived until he graduated from Kimball County High School in 1947. On September 9, 1951, he was united in marriage to Dorothy Mae Christensen at the First Lutheran Church of Potter. They made Potter their home for the next 16 years. On November 28, 1951, Bill reported for induction into the U.S. Army and spent a year in Korea during the Korean War. He was discharged in August of 1953 and began his 36-year career with Farmer Cooperatives, beginning with his employment with the Farmers Union Cooperative Gas and Oil Company in Sidney, Nebraska.

In 1961, Bill and Dorothy adopted their first child, Craig William, through Lutheran Family Services in Omaha, Nebraska. Their family was further increased with the adoption of their daughters, Jolynn Kay and Lori Jean in 1963 and 1966, respectively. Also, in 1961, Bill began working for the Potter Cooperative Grain Company. In 1967 the family moved to Yuma when he accepted the position of Feed Mill Manager with the Yuma Farmers M&M Co-op. He was later promoted to Office Manager in Yuma. In 1972, he accepted the position of General Manager of the Farmers Union Co-op Elevator Company in Wray. He spent the next 18 years in that position his retirement in 1990. In 1994 he ran for and was elected to a four-year term on the Wray City Council, the last two years as Mayor.

Bill was a life-long member of the Missouri Synod Lutheran Church, having been baptized at St. Marks Lutheran Church in Bloomfield, Nebraska on November 17, 1929. He was active in church and community affairs throughout his life. He was President and Treasurer of the congregation of First Lutheran in Potter, President of the congregation at St. Johns in Yuma, and served several years as a trustee at Calvary Lutheran in Wray. He was a member of the fire department and school board in Potter, President of the Yuma Federal Credit Union board, and a member of the East Yuma County Historical Society board, American Legion, Veterans of Foreign Wars, and the Second Infantry Division Association. In addition, Bill served eight years on the Colorado Co-op Council Board and two years on the Colorado Grain and Feed Dealers board.

He is preceded in death by his wife, Dorothy; his daughter, Jolynn; his brother, Phil and sister Anita; and his parents and stepfather, George E. Jackson.

He leaves to mourn his passing his son and daughter-in-law, Craig and Trina; his daughter, Lori Waknin, his two granddaughters, Holly Mandis and Lanina Piil and Lanina's husband, McKennon, his great-grandson, Benjamin Mandis, all of Denver, Colorado, and his sister, Linda, and brother-in-law Tom Watson of Arizona.