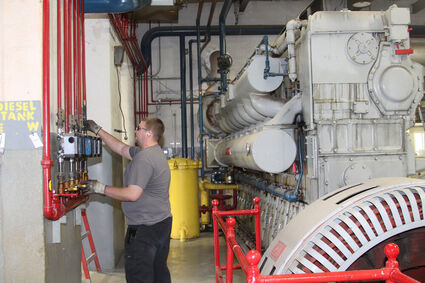 Last week proved to be an enormous strain on the electrical grid as temperatures dipped and electricity demand increased.

The Kimball Municipal Power Plant, which has not operated continuously since 1980, did just what it was supposed to do in such a critical period. It was running and producing extra needed electricity for the grid.

Under a contract with Municipal Energy Association of Nebraska/Nebraska Municipal Power Pool, the local power plant must be tested quarterly and be on standby to produce electricity when requested by MEAN/NMPP, according to Electric Superintendent Bill Hinton.

City Clerk Annette Brower informed the Observer that MEAN/NMPP did "contact the City last week and advised us that they would be relying on us to generate for the grid to assist with the statewide issues being affected by the historic cold temps and outages." Brower said that this was the first time in a long time that they have been required to generate for the grid, and it was for an extended time.

The power plant generated electricity Wednesday and Thursday from 7 a.m. to 11 p.m., but by noon on Friday, MEAN/NMPP contacted Superintendent Hinton to inform him that they could stop generation.

Superintendent Hinton explained in his electrical language that "MEAN carries the grid, the whole power grid. What we are doing right now is we are going to that power grid, but basically what it is doing is coming right back because it takes the least resistance of path. So on our line, it probably is coming back into us; it is a cleaner power because we are still tied to the grid."

Hinton had power plant employee Nate Lousberg on the job, and his crew pitched in to help along with city employees from various other departments.

The plant is equipped with five diesel engines and one giant diesel engine called The Cooper. The Cooper Bessemer Engine #65 is a 16 cylinder engine and was built in 1976 to produced 3,900 kilowatts of electricity.

The engines have to be warmed up, cooled down, unscaled, and tended to on a constant basis.

The power plant was operational and used by the city until 1980, when the city began to buy electricity from outside sources. At that time, the plant stopped running 24/7.