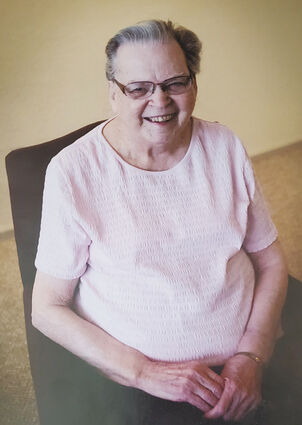 Fern E. Yung, 95, of Kimball, died at Kimball Health Services on Wednesday, January 27, 2021. Cremation has been held and memorial services will be held at 10:00 a.m. on Saturday, February 6, 2021 at the Cantrell Funeral Home with Brad Stuefen and Juli Harthorn officiating. Private family burial has been held. Friends may visit http://www.cantrellfh.com to view Fern's Tribute Wall and leave condolences and stories for the family. Memorials in may be given to Vista Villa, 720 Vista Drive, Kimball, Nebraska, 69145. The services for Fern have been entrusted to the Cantrell Funeral Home.

Fern Evangeline Yung was born in Broken Bow, Nebraska, on August 19, 1925, the daughter of Alfred and Laura (Neilsen) Petersen. She attended country school close to Mason City, Nebraska. She moved with her family to Riverton, Wyoming in 1941 and helped on the family farm. Fern was married to Edward Yung and moved to Kimball, Nebraska, where they lived for 62 years. They farmed and owned Weather Wise Mfg. Following Ed's death in 2009, Fern moved into Vista Villa.