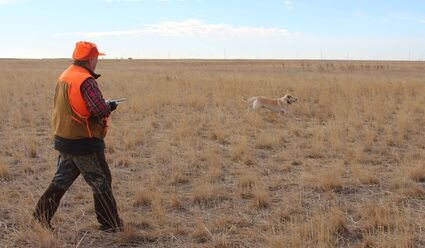 A new complex of buildings is quite noticeable south of Kimball along Highway 71. The pheasant hunting complex is about 11 miles south of Kimball, close to the Colorado border. The complex includes nine bird houses with large pens, a lodge, rental cabins and numerous other outbuildings. The relatively new business in Kimball County known as Real Western Wings Controlled Shooting Area #290 provides hunting for pheasants and chukar.

According to Dale Critchfield, owner and operator of Real Western Wings, controlled shooting has become popular. Critchfield said that in the 1960s there was lots of wild pheasants and hunting was good, but wild pheasants have decreased in population due, in his opinion, to a lack of habitat, protection of predatory birds and an increase in predatory animals such as fox and coyotes, so therefore the recreational need arose for controlled shooting areas.

Real Western Wings is in its second year of accepting hunters on more than 900 acres of leased CRP private lands. Last season, Real Western Wings hosted between 70-80 hunters, but this season to date more than 300 hunters have visited and taken a gamble on shooting a released pheasant or chukar.

Throughout Nebraska at least 80 other controlled shooting areas exist, mostly in central Nebraska, along the river and close to major population centers. But Critchfield is convinced that people will drive to hunt pheasants. He feels that he can draw from Scottsbluff, North Platte, Cheyenne, Laramie, Sidney, Denver and the entire Front Range. He thinks it is a win-win for hunters and landowners alike. The landowner receives a lease fee and hunters know there are birds to be hunted in the area and it is safe environment.

The season for controlled shooting is October-March and there is no limit to the number of pheasants or chukars that a hunter can take home. Critchfield said, "It just depends on how your supply of birds lasts and the supply of your cover. The high winds have been kind of hard breaking down on the weeds and cover. If you don't have any cover, you don't have any birds. The hunters want to see cover and vegetation." 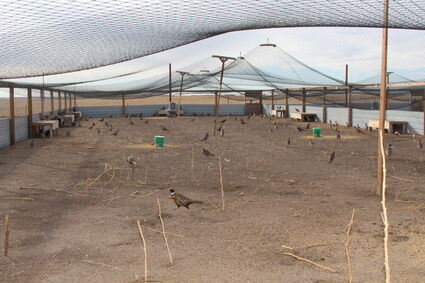 Looking out from the pheasant shed into one of the nine pens full of pheasants.

For this season, Mr. Critchfield raised more than 3,000 birds to eventually be released or sold. He had more than 1,000 baby chicks in three buildings and the temperature has to be 95-98 degrees. About 5 million to 6 million pheasants are raised yearly in the United States.

Some hunters purchase between 50-100 birds just in order to train their hunting dog.

Once a hunter arrives, Critchfield shows them the areas available to be hunted. He then catches the number of birds, 3, to a hunter minimum. Critchfield then releases the birds, and the hunt is on.

Real Western Wings has a variety of packages and options for individual and group hunting.

Critchfield has lots of hunting experience. He has had and continues to have a big game outfitter license in Wyoming. But after many other experiences and businesses, he landed himself and Real Western Wings in Kimball County.