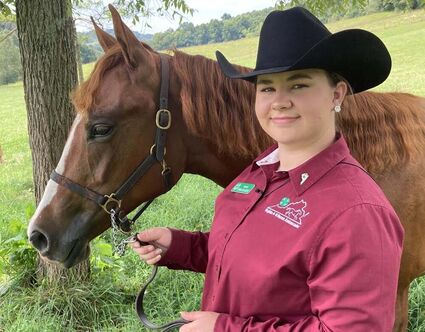 Mattie Debord of Virginia stands with Charis, SJQC Arual Blanton. She received the young filly to train and own after the horse was donated to the American Quarter Horse Association youth program by Jo and Roger Timmerman of Kimball.

Almost a year ago, a 15 year-old Mattie Debord from Virginia came to western Nebraska to pick up a weanling from Jo and Roger Timmerman. Timmermans had donated the young filly to the American Quarter Horse Association Ranching Heritage Young Horse Development Program and Mattie was one of 44 participants, Mattie received the Timmermans horse to train and own.

The Observer did a story on Mattie, the Timmermans and Charis or SJQC Arual Blanton in February and now the program has been completed.

The contest concluded in November, Mattie and her horse Charis were named the 2020 AQHYA Young Horse Development Program Champions. Mattie received a $2,000 scholarship, a custom belt buckle and the announcement was displayed on the scoreboard at the National Finals Rodeo.

In addition, Mattie was evaluated on her horse knowledge and horsemanship skills, she was assigned an AQHA horse trainer to work with and evaluate her.

The competition also included regular video submissions and a video update to the Timmermans.

Mattie described her horse: "She is very quiet and willing, with a good mind. She is definitely a heart horse and I am very much looking to see what we can accomplish in the future."

Mattie also said that "Jo and Roger (Timmerman) have been my biggest cheerleaders and I love that we have formed a relationship, although we are so far apart."

Charis, the horse is just 20 months old now, Mattie won't start a riding program on the horse until spring but she would like to do ranch versatility with her in the future.

The Timmermans have donated another weanling, known as SJQC Pip Blanton to the 2021 contest. The lucky winner of the Timmermans horse was an Oklahoman named Kailey Isreal.

According to the AQHA announcement, "The Young Horse Development Program was created in 2011 to give AQHYA members an opportunity to learn the fundamentals of horsemanship."