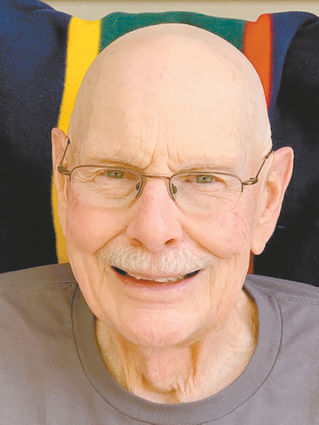 Gerald Lee Robbins, 83, passed away peacefully October 30, 2020 with family by his side. Funeral services will be held Tuesday, November 10, 2020, at 10:00 am at Trinity United Methodist Church in Kimball with Pastor Roger Gillming officiating. Burial will be held in the Kimball Cemetery. Friends may call at the funeral home on Monday, November 9, 2020, from 1:00 pm to 6:00 p.m. In lieu of flowers, memorials may be given to Trinity United Methodist Church or The Friends of Kimball Library. Visit http://www.cantrellfh.com to leave condolences for the family. Services are under the care of Cantrell Funeral Home.

Gerald (Jerry) was born in Sidney, Nebraska, on March 1, 1937, the son of Bill and Ruth (Macgirvin) Robbins. Jerry attended school in Sidney graduating from Sidney High School in 1956. After graduation, he joined the Nebraska Army National Guard where he specialized as a sharpshooter. Jerry married his high school sweetheart Shari Speer on August 18, 1957, in Sidney, they spent 58 wonderful years together. They settled in Kimball to raise their four children, Laurie, Lisa, Gregg and Scott. Jerry operated Redman's Shoes until the store closed and he began his 31-year career with the Kimball County Highway Department. There he was an Operator of heavy machinery, Foreman and retired as County Highway Superintendent.

Jerry had many hobbies and activities. His lifelong love of hunting began as a child hunting the fields around Sidney with his dad, brothers and best friend Kyle. He spent his entire life chasing doves and pheasants and during goose season you could always find Jerry at Oliver Lake in his hunting blind. He trained black Labradors for hunting and field trial competitions, earning awards for several of his dogs. In the warmer months you would find him at the golf course where he was always the first group on the course or see him crisscrossing town while running or riding his bike. He was an avid runner, participating in races all over the country, including the Bolder Boulder and Lincoln Marathon. Many people will remember him as a softball umpire; more memorable were his passionate strike calls. Collecting marbles and birdwatching were among other hobbies he enjoyed. Fishing with friends and his brothers was always a special time. He loved to follow his kids and grandkids activities; there is no doubt that with all his experiences he had great advice to share with them. Jerry was an active member of the Trinity United Methodist Church, where he served many roles, including Lay Leader, and preached when called upon. Jerry loved his family and friends; he will be dearly missed by all who knew him.