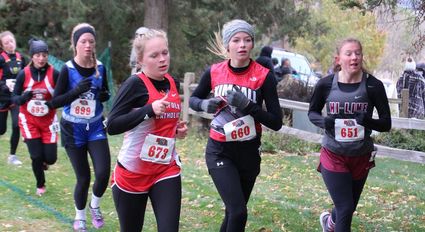 Lorri Norbert For the Observer

We can close the door on one more Fall Sport for Kimball High School with the completion of the 2020 Nebraska State Cross Country races held at the Kearney Country Club Golf Course this past week.

As reported last week, Kimball had two state qualifiers in sophomore Matt Johnson and junior Chantel Malson, but Malson ended up being the Longhorns' only participant at state due to a health issue that prevented Johnson from competing.

Matt was unable to compete due to being informed his blood sugar was not at an acceptable level. The young athlete was diagnosed recently that he is a type one diabetic. An unfortunate happening for certain for Matt!

Chantel had a good performance as she ran 77th out of the field of 121 female runners in the Class D race and did well according to coach Tiffany Johnson, who said, "It was a cold and breezy day and like always, they ran on a very hilly course at the Kearney Country Club." This was the 3rd consecutive year Chantel has qualified for the state meet. Congrats to you, Chantel.

Another event I can report on to you readers that I didn't even know was taking place was the Midwest Federation Wrestling event held this past Saturday in Kearney. This was postponed from last April, I understand.

A small group of Kimball wrestlers participated and wrestled with the Victory Training Center team of Loveland, Colorado, owned by former Kimball grad Kyle Schnell. By the way, Kyle's son Kole finished 3rd in his division.

For Kimball, Tragen Johnson placed 2nd in his age and weight division and his brother Chance was unopposed at his age so moved up and ended up wrestling in the same division as older brother , finishing 8th out of the bracket of 10. Britton Culek wound up 3rd and Decker Culek 5th in their respective divisions.

As to the future of Federation wrestling this season due to the COVID-19, no one knows for sure what it will be. I am also curious if the junior high and high school wrestling seasons will also take place. I see on the Kimball school schedules that our Junior High wrestling team is scheduled to wrestle at Banner County this Saturday, Oct. 31, and then host their own Kimball Tournament on November 3rd.

Junior High girls basketball is to tip off on November 5 at Bridgeport too. High School wrestling and basketball will get underway the weekend of December 3-4.

Due to the snowstorm, the subdistrict volleyball involving Kimball High was moved back one day from Monday evening to Tuesday so we will give you that story next week.

Wishing the best for the Potter-Dix football team as they host their first game of the State 6-man playoffs after completing a perfect 8-win, no-loss regular season. The Coyotes will host Wallace tomorrow (Friday evening) with kickoff set for 5 p.m. Here is a chance for you fans to take in a six-man game and cheer the Coyotes to victory. What an outstanding season they have put together!

I received word that the Nebraska School Activities Association has awarded a football playoff game to the Kimball Reffing crew. This will be the third year in a row they have been selected by the state to work a playoff game. The Kimball crew is coming off a season where they worked a total of 18 games, including junior high, J.V. and varsity games.

The Kimball crew consists of Henry Heeg, Randy Bohac, Andrew Bohac, Jake Daum, Gene Mohr, and Kevin Thomas. They will be working the playoff game at Chappell between Creek Valley and Spalding Academy this Friday evening (October 30) beginning at 5 p.m.