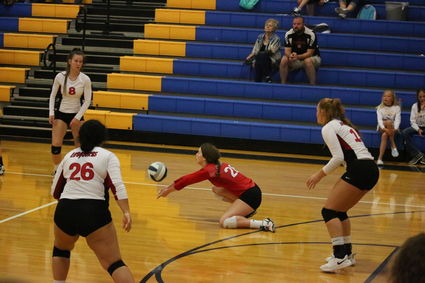 Drew Biesecker for the Observer

Sydney Biesecker, digging, and her Longhorn teammates have a date in subdistricts Oct. 26.

Kimball's Lady Longhorn Volleyball team had three matches over the last week, with two of them being losses to a tough Chase County team before a win on Saturday against Sutherland.

On Tuesday Oct. 13, Kimball hosted Chase County, and the Lady Longhorns started hot and outlasted Kimball in the first set, taking the victory 25-to-21. But the visiting Lady Longhorns were able to regroup and find their rhythm, attacking all areas of the court and ripping off three straight set wins 25-to-15, 25-to-18 and 25-to-14 for the 3-to-1 match victory.

On Saturday it was tournament time, and the Lady Longhorns again faced the Chase County squad, but this time Chase County was able to make quick work of the Kimball team, winning 25-to-11 and 25-to-19 for the 2-to-0 match victory. Senior Megan Spicer had seven assists in the loss.

Finally, Kimball faced off against the Sutherland Lady Sailors, and after losing the first set 25-to-20, the Lady Longhorns roared back with 25-to-17 and 25-to-20 set victories for the 2-to-1 match victory. Sophomore Jayden Paxton led the attack with seven kills, while Hargreaves delivered six service aces and Spicer had 14 assists in the victory.

Kimball's record moves to 4-and-21 for the season and they were scheduled to face Perkins County on the road this week on Tuesday.