Help Is Here With Brittany Cook 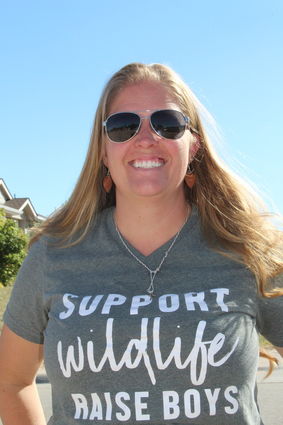 Brittany Cook, the president and founder of Kimball H.E.L.P.S. is originally from Crook, Colo., and attended Caliche High School. Caliche School was a tight-knit school system with a huge support system, key ingredients were volunteerism and a strong parent-teacher organization.

When Brittany and Travis Cook’s oldest son started school Brittany knew she wanted to help create support for the Kimball School and her own children.

Previous administrations were rather stand offish to the H.E.L.P.S. philosophy but Brittany was not going to be deterred from supporting the school, she even describes herself as “a little bit hard headed” about the whole thing. Running into resistance has made her more determined than ever and she has described our new superintendent Mr. Anderson as “very receptive” to the Kimball H.E.L.P.S. “It has been nice, we are not trying to step on anyone’s toes, we just want to help and just want to make a better environment for kids, faculty and staff and when you do that you make a better school, when you make a better school you make a better community.”

Since the inception of Kimball Helping Empower Learning and Pride with Support, Brittany has received assistance from parents, community members and teachers and now the administration.

When her, now 7th grade son, was a preschooler, she began to notice that Kimball Schools needed additional support for the teachers, the kids and the school. She began to see things-like not sending calendars home with the kids, also, communication with parents seemed to be lacking and there didn’t appear to be a lot of support for staff.

Brittany began doing things secretly for the elementary because she “loves to be involved” and wanted to show her appreciation to the staff. “But then, I got more and more parents saying we would love to be involved, there are a lot of parents that work and they want to be able to help support the school”.

Once Brittany started doing things, other parents began talking to Brittany about issues and ideas and so began Kimball H.E.L.P.S. which is now a 501-3C non-profit organization. By being a 501-3C, they can accept donations and the donations are tax deductible. Brittany said that was a very difficult and expensive, two year project to get the 501-3C status.

In addition to Brittany as president other board members are Hillary Cook, Jen Coleman and Melissa Reich.

Special projects that Kimball H.E.L.P.S. has initiated or sponsored-Homecoming week, Grandparents Day, Parent’s Breakfast, first day of school prizes and goodies, awards, testing goodies, they purchased a parachute for elementary P.E., partnered with the school to purchase water bottles for all students and supported teacher appreciation week and recently they purchased much needed portable storage units for the music room in the high school.

Anyone can be a member, parents, grandparents, teachers, community members-there are no dues, no meetings to attend, just help when you can. Maybe you can only help one time all year, it is better than nothing. According to Brittany “It is an open group, a good way to get everybody to make it (the school) a better place.”