Longhorns Put Up 20, But Fall To Sailors 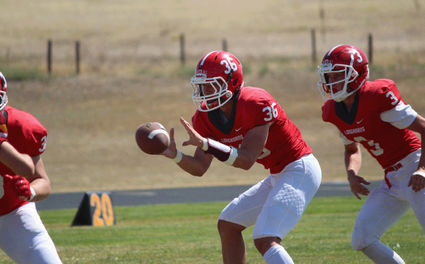 Kimball senior Christian Allen-Van Pelt and the Longhorns look for their first win of the season against a good Perkins County team on Friday.

Kimball's Longhorn 8-man football team continued its early season struggles against the Sutherland Sailors on Friday night, dropping to 0-4 on the season after the 56-20 loss in Kimball.

The Sailors were able to capitalize on Kimball mistakes early in the game and built up a big lead that the Longhorns could not overcome, with a few scores by the home team near the end of the contest keeping the score respectable.

The Sailors were able to even their season record at 2-and-2 while the Longhorns continued to struggle with putting together sustainable drives while making costly mistakes.