Choice For City Administrator Goes to Council For Approval 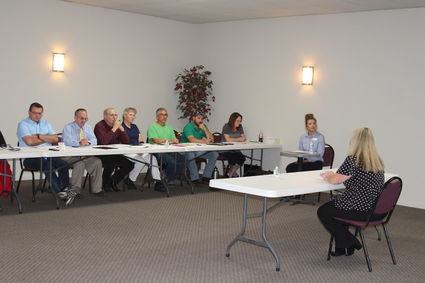 Members of the Kimball City Council and Board of Public Works and the mayor of Kimball listened to the answers from the candidates chosen to be interviewed for city administrator. Annette Brower, right, was the first candidate interviewed, followed by Carson Sisk. Mayor Prunty choose Annette Brower for the position, and council must approve the selection.

After months without a city administrator, Annette Brower has been picked for the position by Mayor Keith Prunty. He will ask for approval for Brower's appointment from the city council at the next meeting Sept. 15. The appointment requires city council approval.

The other finalist was Carson Sisk.

Mayor Keith Prunty issued a statement late Monday afternoon: "After careful consideration, I have come to a decision on my appointment of City administrator. Going into this process I knew I had two applicants who both possess great skill sets. The opinion of both boards were equally divided. I have considered the interview, the self-assessment, and my own personal knowledge of their character, skills, knowledge, and ethics. My decision is Annette Brower. I look forward to everyone's support for Annette."

The Sagebrush was the scene of the combined City Council and Board of Public Works meeting and the purpose was to interview two candidates for the city administrator job which has been vacant since May when Dan Dean retired. The candidates were Annette Brower, city treasurer and Carson Sisk, water superintendent.

Each candidate was asked the same 18 questions and each interview last between 30-35 minutes, with about 35 members of the public looking on.

Jamie N. Weingart from JNW Consulting, LLC asked the questions while the mayor, city council and board of public works completed an evaluation of the candidates answers.

The questions addressed a wide range of leadership traits including communications, experience, strategic planning, problem solving and conflict management to name a few.

Brower described herself as having "active listening" skills and "respect for other people" and she said she feels she is "honest and transparent." Brower also said that she held herself "to high standards." As city treasurer, Brower said she understands "financial stability."

Carson Sisk, on the other hand, described himself as "level-headed, and conflict with the public is something I am very good at." He also said he would "approach a situation with an open mind."