Cameron Wynne To Play For Nebraska 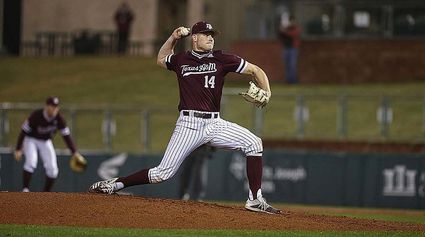 Cameron Wynne, shown in his old Texas A&M uniform, has transferred to Nebraska where he will pitch for the Huskers in his final two seasons of college baseball. Cam is the son of Brian Wynne, a Kimball High grad of 1997, and the grandson of Roger and Ann Wynne of Kimball.

Cameron Wynne, the son of Brian Wynne who was a 1997 Kimball High grad, and an outstanding athlete for the Longhorns, has signed to return home to Nebraska to play out his collegiate baseball.

Cam, as he goes by, grew up in Lincoln and played his high school baseball at Lincoln High before playing 2 years of baseball for Johnson County Community College in Overland Park, Kansas. His next move was to sign with Texas A&M.

When the COVID-19 scare came along and everything came to a halt, Cam went home to Lincoln, decided he liked just hanging around home and his hometown, and elected to leave Texas A&M and become a Husker!

In high school Cam played both infield and outfield positions before the coaches noted how hard he threw and moved him into a pitching role, according to his dad. As a senior in high school he could throw in the mid-90s, and now at 6'6" and 225 pounds, he throws right at the 100 mph mark! Nebraska will get his services for 2 complete years, and hopefully the Huskers will have baseball yet this year.

This summer, Cam is playing in a summer league at LaCrosse, Wisconsin, as a member of the Loggers team. There are ways you can watch games on TV. Call his grandparents, Roger and Ann Wynne, who still reside right here in Kimball. They watch games and also are hoping to get to travel and catch some games. Cam's parents are in LaCrosse this week watching their son.

Along with his parents, Brian and Jennifer, Cam also has a brother, Cayden, who will be a senior at Lincoln South this fall and is an outstanding golfer. Cam's 13 year old sister Sophia will be an 8th grader this year and is a very good athlete in her own right, and it will be interesting to see what sports she settles on.

It is always interesting to follow up on the former athletes of Kimball and what is happening in their lives, and for certain there is excitement in the lives of both Brian and his family, including grandma and grandpa Roger and Ann who still call Kimball home. A good reason to really follow the Nebraska men's baseball for the next couple of years. Mow 'em down, Cam!