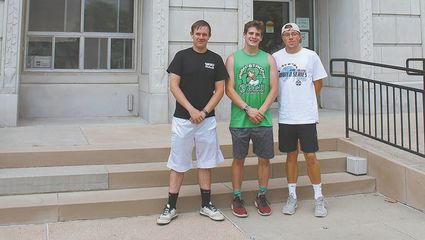 Kimball was number 435 of 531 towns on the list to visit for these three UNO sophomores. Checking out the Kimball County Courthouse, from left, are Seth Varner, Austin Schneider and Jack McGonigal.

What do you do when COVID-19 hits and your freshman year at college is cut short?

Seth Varner and Austin Schneider decided to visit incorporated Nebraska towns and cities – all 531 of them.

Seth explained how the visit began.

"It is something to do, we had nothing else to do in March, so after we got sent home from college, I said, 'Hey, Austin, you want to go visit every town in the state.' "

Austin said he was all for it.

They just finished their final trip, an eight-day adventure to the Panhandle, where they followed Highway 30 west and then looped north and wound their way through the Sandhills and finally headed back to their hometown, Wahoo.

When this trip is finished they will have almost concluded their 531-visit project, with only their hometown of Wahoo to visit and tour.

Kimball was town 435 of 531. While in Kimball they went to Gotte Park, saw the ICBM missile and visited the high school. Before Kimball they hit Potter, Dix, then Kimball, then headed to Bushnell, and continued to unincorporated Harrisburg. Due to the fact that Harrisburg is the county seat, they stopped there to get a picture of the courthouse, museum and school. When they are finished they will have pictures of all 93 county courthouses in addition to pictures of all the cities and town in Nebraska.

As on most trips, Seth said he and Austin brought along a friend "because it is boring just the two of us. They brought Jack McGonigal on this trip.

"We spend a little bit of time in each community," Seth said.

As they came out west, they said they have really enjoyed the beautiful views – because all they saw in the east was cornfields.

When not visiting cities and towns in Nebraska, Seth and Austin work at the Dairy Queen in Wahoo. In the fall, the guys will return to start they sophomore year at the University of Nebraska Omaha.