Kimball's Mike Daum Named Player Of The Game On ESPN 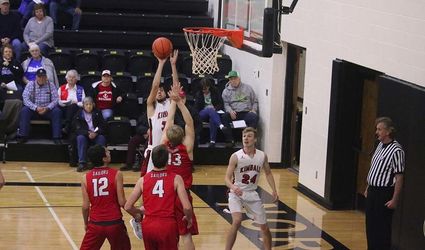 Sam Cajero, shooting here during a Kimball Longhorns basketball game this past season, gets the chance to see his former teammate Beau Hanks and former coach Mo Hanks during Panhandle Prep All Star Basketball on July 17 at Cougar Palace. Cajero amd Beau Hanks were selected to play and Mo Hanks is helping coach one of the teams.

A lot of golf to be played this weekend at the Kimball Four Winds Golf Course as a lot of golfers will tee it up in the Vince's Corner 2-day 4-person scramble. Saturday start time is 12 noon and Sunday start time will be either 9 or 9:30 a.m.

Four Winds Pro Chad Wise said, "We will have open golf both days also but you need to call for tee times."Ā

This annual tournament started by Henry Heeg 11 years ago attracts so many former Kimball residents who live elsewhere now but return for the golf and the reunions with friends. If you get a chance, and you are not playing, just drive out to see some of these faces, and watch some good golf as well.

Chad Wise informs me that at the time of this writing, there are still room for a couple more teams for the Cross Country-Glo Ball 4-person scramble set for July 18th. This is one where golfers play 9 holes in the daylight, stop for dinner, then play 9 holes in the dark. Lots of laughs and good food served up by Dave Klinkhammer!

How about our Big Mike Daum!

Did you watch him playing the TBT Basketball Tournament on ESPN Saturday night? You should have as he put on a show that got him "Player of the Game" honors.

He scored 21 points for the House of Paign team, along with 13 rebounds plus some assists, steals and blocks. He led his team to a 76-53 win over War Tampa.

They were to play July 8 against Carmen's Crew, the defending champions and number one seed, and will have to have an awesome performance to unseat the favorites.

Panhandle Prep All Star Basketball will be played this year despite the COVID-19.

It has been announced the games will be held July 17 at Cougar Palace in Scottsbluff with the girls game set for a 5:30 p.m. start followed by the boys game.Ā

A pair of former Kimball High coaches will be involved coaching All Stars as Mo Hanks will assist Mitchell's Jason Gregory on one of the boys teams and will get to coach son Beau one more time as Beau was selected as one of the 12 All Stars on the Gregory/Hanks team.

Kimball's Sam Cajero was also chosen, as was Michael Shain and Justus Golding of Pine Bluffs.Ā

Chauncey Pedersen, who headed up the Kimball High girl's basketball program for many years before accepting a teaching/coaching position at Morrill for this next school term, will assist Pine Bluffs coach Lindsey Forbes on one of the All Star girls teams, which will include Carli Wurdeman and Jenna Greenwood of Kimball High fame and Maddi Fornstrom, Hyleigh Fornstrom, and Sophie Howard all of Pine Bluffs.

Chauncey told me it is a one-day situation where they will gather on Friday, hold a couple of practices, and then play the game that evening.

Mark your calendars for July 17.

Looking for something to do on a Friday night? Drive out and catch some adult softball at the Kimball Rec Area. They play 5 games every Friday evening starting at 7 p.m.

Tiffany is keeping busy this summer coaching youth baseball, playing and organizing adult softball, and holding cross country practice every Monday and Wednesday evening at 7 p.m. She is also getting ready for the Fair!