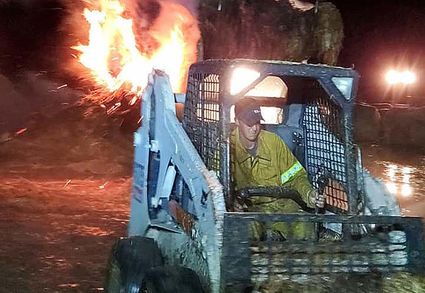 The Potter Fire Department used loader equipment while pulling bales engulfed in flames away from the stack at a persistent blaze in southwestern Cheyenne County. Potter fireman Jeremy Gasseling, above, uses a skid steer during the effort.

Herb Stevens has been the Potter fire chief for 27 years, but he said, "This is one that you remember." He was talking about a huge bale fire south of Potter, just two miles from the Colorado state line.

Stevens said they received the call at 6:30 Wednesday morning and at 3 Saturday morning he was finally able to send his men home.

They had 70-plus hours fighting a fire at the Johnson farm and ranch in the southwest corner of Cheyenne County.

Stevens said his guys will be able to get a day or two of rest and then start harvest.

Potter Fire Department, along with Sidney, Peetz, Dix, Kimball and Dalton, responded to the 500 bales of millet/hay on fire. The fire departments rotated in and out. Stevens was thankful for the help from the area departments.

The cause of the fire is still under investigation, but spontaneous combustion is a possibility. When the Potter Fire Department arrived the entire top row of big round bales was engulfed in flames, according to Stevens, "one of our concerns was the trees, but we worked pretty hard to keep the fire away from them."

Using meters and other measuring devices, Stevens said they poured 700,000 gallons of water to the fire. When they would take one bale off, the oxygen would get to the bale underneath and it would just explode according to Stevens. Even though the bales would be soaked it would be hot underneath.

The fire departments used tractors, skid steers and loaders but had to be cautious as not to overheat the hydraulics of the equipment they were using.

Stevens was so proud of his men.

He also said "hats off" to all the people that brought food and water, especially the firemen's wives. Businesses also brought out lights and a tent.