Drive-By Parade Brings Together Loved Ones A Bit During Pandemic 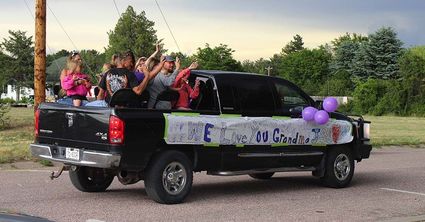 After 100-plus days of lockdown, the residents of the Kimball County Manor got to see their relatives June 26 in a "Drive by Parade." Known as Grandma "J", Janet Mulvihill's family packed the back of a pickup with relatives, including her children, some grandchildren and some great grandchildren, and cruised by the manor.

Kimball County Manor had a "Drive by Parade" for their residents on Friday, June 26. The manor encouraged people to decorate their cars and have signs for the residents.

The parade was led by the Kimball Volunteer Fire Department and families and friends of residents followed the fire trucks.

The sign on the manor windows says: "Nothing Can Rain on Our Parade," but the rain and the lightning forced residents inside instead of enjoying the parade from the sidewalk. The original plan had included 43 residents sitting in chairs six feet apart with balloons attached to the chairs, but their spirit wasn't dampened by the lightning as they watched from inside.

While watching the parade, the Dairy Queen treated all residents to a dish of ice cream.

According to manor Director Shannon Monheiser, in order to move from phase two to phase three of the Governor's Directed Health Measure, all manor staff must have baseline testing done. Although phase three will have less restrictions on guests, visitors will have to wear masks and be screened before visitation.

Monheiser also said how difficult this COVID-19 has been on the residents.

"This has forever changed the way we do things," she said. "It has been very hard."