Ready To Take The Plunge

The New Normal Continues With June 25 Opening Of Kimball Pool 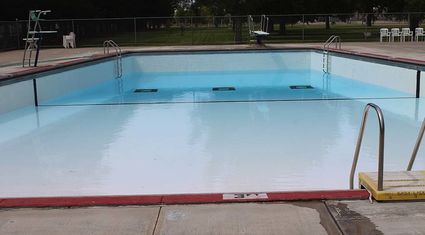 It's a go. The Kimball community pool will open a bit late this year due to the virus, but it is indeed set to open June 25.

The Kimball City Council voted 4-0 to proceed with the opening of the swimming pool.

The Health Directives from the Governor's Office have complicated matters with the pool, but it appears that by June 22 they will be able to operate at 75% capacity, which is pretty a pretty normal level of activity, according to Carson Sisk, water superintendent.

The council vote came at its June 16 meeting. The pool's opening date is set for June 25.

The pool staff of lifeguards will be limited because no one was able to take the Red Cross training, but the City of Kimball was able to obtain extended certification of five lifeguards from last year.

Reagan Hinton, manager of the pool, asked the public to be mindful that the lifeguards are young, between the ages of 15-25. She hopes the public will be patient and respectful of these young people.

Much of the meeting centered on working out the kinks in the Infrastructure and Business Grant programs. The city council had 17 grants to approve.

The council authorized the mayor's signature on the engineering agreement pertaining to the water main looping project.

Ordinance 779 dealing with allowing golf carts on city streets passed the first reading. The ordinance language will stay the same and be read two additional times so that the public can make comments. It would appear that at the August meeting, the city council will vote on the ordinance.

The mayor reported that some improvements in the parks will take place:

• A pickle-ball court will be installed as well as fixing up the basketball courts.

• Using donations and ACE Funds a bridge will be built across the ditch by the service flags in Gotte Park.

• The VFW is selling bricks to build a memorial wall.

Finally, after years of drilling samples, plans are in the works for the removal of petroleum in the groundwater in the area of Panhandle Coop, Kwik Stop and Vince's. The removal process will take about a month and will start in October.