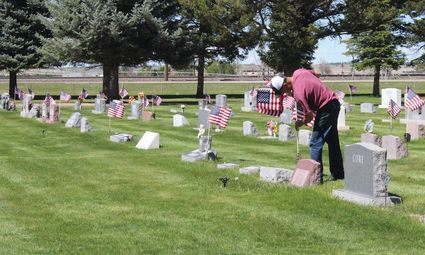 Volunteer Mike Moehr places a flag at a veterans grave last week before Memorial Day. With the help of volunteers, the Veterans Office has been placing flags on veterans graves for the past 10 years.

On a cool and windy Memorial Day, a small crowd at Kimball Cemetery gathered near their cars to honor those "who gave it all."

Pastor Ken Mars opened up the morning ceremony with a prayer and Mayor Keith Prunty spoke, while an honor guard stood nearby.

Prunty, reading from remarks he found online and appreciated, said, "Those who are in today's military face a world that is fraught with change and challenge. As they are thrust into the boiling cauldron of war and conflict,...