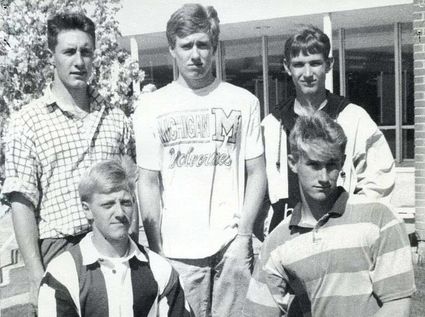 When the Kimball boys golf team won the school's only state title in that sport in1993, the Observer's Tom Southard wrote the report for the Observer – which is being posted here 27 years later. From left are Jim Barrett and Brock Wentz in front and Brian Frederick, Cris Brown and Brian Webb in back.

Tom Southard wrote an introduction in last week's Observer for the story below that he wrote in 1993 about Kimball's new golf state champions. Also presented below, after that story, is a follow-up that Tom wrote as Kimball was enjoying the good life with its champs.

The team captured the Class C District championship at North Platte May 12 and then won the state championship in an extra hole playoff at Lochland Country Club in Hastings.