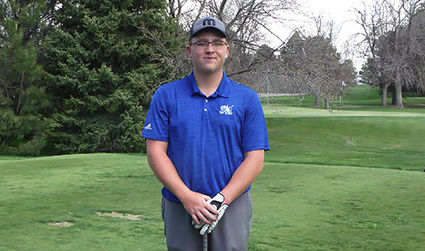 Dillon Wise, the young man who excelled for four years as a Kimball High golfer, is still improving his game and on May 1 established a new Four Winds Golf Course record with his round of 31-32=63!

While playing his record setting round with Grant Hickman, Dillon scored six birdies, eagled both the number 8 and number 13 holes, and had but one bogey on hole number 2, when he hit his drive into the trees and had to work his way out.

Of note, with his new course record he erased the old record of 64 held by his father and Four Winds Pro Chad Wise.

Dillon is a member of the McCook Community College Men's Golf Team, but saw his spring season at McCook erased because of the coronavirus shutdown of all schools and sports.

He is finishing up his first year of collegiate studies online, along with helping out Dad at the golf course and, of course, getting in some golf. Congrats, Dillon Wise!