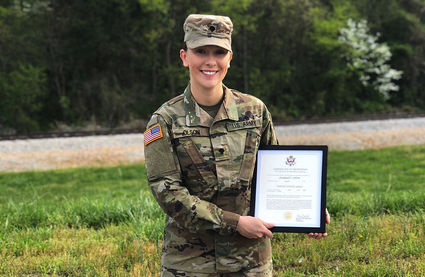 While almost all of the nation has pretty much shut down all active sporting events, Kimball's Ireland Olsen can advise you on how you can stay active ... JOIN THE ARMY!

The 2016 Kimball High grad, daughter of Rick and Shelly Olson of Kimball, stayed active while a member of Kimball County High, participating in basketball, volleyball, and track. Although she was never a standout as a high school athlete, she has climbed to the top after enlisting in the Army back in September of 2018.

Following her graduation from Kimball High, Ireland enrolled at Southeast Community College in Beatrice with the medical field on her mind as a career. She earned an LPN nursing degree at Southeast and then moved to Lincoln, where she planned to continue her nursing ambitions.

While waiting to enroll, she worked jobs in Lincoln and got involved heavily in physical fitness. It was at this time she also elected to join the Army and fulfill her ambitions of becoming a combat medic. She became a member of the United States Army in September of 2018, did her basic training, and was then sent it to Fort Campbell, Kentucky, where she is a member of the 101st Airborne Division.

Even during her basic training, Ireland stood out, finishing right up at the top in timed distance runs and other physical challenges. She graduated from basic with honors. At Fort Campbell, Ireland was attached to the Airborne Air Assault Infantry School and she had to pass this school to keep advancing towards her goals, which she did on July 25, 2019.

To become a combat medic, a soldier has to be able to care for wounded, or injured comrades under very trying situations. The combat medic travels right with her battalion or brigade, and their job is to take care of their comrades. This means they have to be very physical fit.

Most of those who make the grade are males, but Ireland demonstrated she could hold her own. One of the tests she had to pass to keep advancing was to complete a 12-mile hike carrying a 75-pound gear bag under the time of 3 hours. Ireland did it in 2 hours and 50 minutes! She was the only female in her class to accomplish this.

Because of her standout showings, she was picked by her commander and 1st sergeant to advance to the GAFPB (Germany Armed Forces Proficiency Badge) testing for which there are five categories to earn the honor – one of which was the 12-mile march with the 3 hour time limit.

There are three metals for placing in each of these categories, and you must score in all of the categories and at least one of these three levels to earn this coveted honor. Ireland finished with gold in the march, gold in the shooting skills going 5 for 5, silver in the agility run, and bronze in the flex arm hang. And in the swimming test it is simply swim for go, or no go!

On April 17, 2020, Ireland was promoted to combat medic specialist! She accomplished all of the above in a year and a half.

Along the way, I might mention, she had to do a large variety of physical tasks, such as climbing a rope 20 feet with full gear, doing a tower climb, log jumping from log to log, climbing over an obstacle course, and of course lots of marching and running.

All the while she is also continuing to study her nursing and medic roles. Ireland is signed up for four years of active duty, plus two more years of inactive, when she could be called back to full-time duty.

When all is said and done, she will be an RN, or more, depending on additional advancements and honors.

So, if you are bored with not being able to participate in physical competition, you could always do what Ireland Olsen has done ... JOIN THE ARMY!