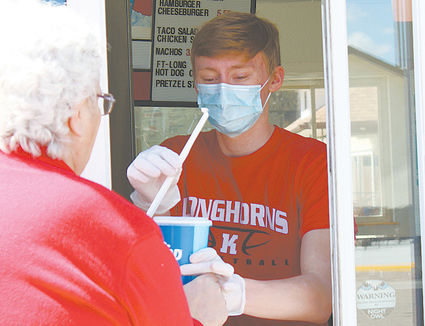 Cole Henton and the rest of the employees at Dairy Queen now wear masks and gloves as they prepare food and serve their customers. Dairy Queen also is delivering food throughout Kimball.

Editor's note: As expected, the National Guard visited Thursday to test Kimball first responders after this story was published.

Kimball County as of April 7 has had 10 positive cases of the coronavirus, according to the results from Panhandle Public Health District.

The last information received indicated that in the Panhandle, 42 tests are pending. Testing results were slower to be returned between April 2 and 5 but it appears that the glitch has been corrected in the system.

Privacy and HIPPA are critical elements in maintaining the anonymity of the cases, therefore only ages and gender are released. The last four Kimball County cases include two females in their 40s, a female in her 30s and a male in his 20s. Close contacts of those individuals that tested positive were notified and placed in quarantine for 14 days after their last exposure.

Of the most recent five cases, two are family members of previous cases and three are close contacts from previous cases. In Kimball, the only reported community exposure location for the last cases was Dollar General on March 27 from 5 p.m to 6 p.m.

Reports have indicated that on Wednesday, Thursday or Friday of this week the National Guard Medical Unit from Kearney will visit Kimball to test first responders, EMTs, volunteers firefighters, medical personnel, emergency room personnel, manor employees and law enforcement for the corona virus.

Sheriff Harry Gillway told the Observer the National Guard will have a total of 50 tests to administer by nasal swab. Only essential personnel will be tested, no public. Those tests, according to Gillway, will be paid for by the federal government. This mass testing will hopefully catch individuals who are asymptomatic and pre-symptomatic.

The National Guard is expected to conduct the testing quickly and be in town for a short time.

Tabi Prochazka, PPHD deputy director of health promotions and preparedness, did not confirm or deny the National Guard information but said PPHD would be putting out a news release with guidance for the public.

PPHD released a statement saying, "We also are concerned and want to be sure there is no confusion."

People with various levels of exposure to the virus will be tested.

Asymptotic and pre-symptomatic people, according to Panhandle Public Health District, "are individuals with a lack of symptoms but they can transmit the virus to others before showing other symptoms."

Those individuals can spread the virus by speaking, coughing or sneezing even if they are not showing symptoms.

Due to asymptomatic and per-symptomatic people, particularly in community-based transmission areas, face coverings in public settings such as grocery stories and pharmacies are now recommended by the Centers for Disease Control.

"The community is on the front line, and we can make the most difference," Kim Engel, director of Panhandle Public Health District ssaid.

The best way to make a difference is to follow the guidelines, which include isolating if you come into the Panhandle.

"To limit the spread in Nebraska, all travelers should self-quarantine for 14 days upon returning home and immediately report any symptoms consistent with COVID-19. The only way this situation will begin to correct itself is if people follow the guidelines.

The city of Kimball, like so many places, appears to be on the front line of this war with the virus.

Many in Kimball realize the ramifications and seriousness of the situation as face mask coverings have become prevalent. Playgrounds are closed, funeral services are limited to 10 people, meetings are cancelled and prom, graduation and other school functions are non-existent.

Some area schools are planning virtual graduations, and Scottsbluff High School has planned its graduation for July.

Principal Mo Hanks reported that Kimball High School has not made a decision on graduation. He said options are being looked at and seniors in the class of 2020 will be asked for input..

The City of Kimball is attempting to lessen the stress and financial burden to its residents during this period.

The city released a statement saying it "has made a decision to incorporate a Covid-19 Disaster Relief Allowance 5% decrease across the board on all utility bills for all customers beginning with the April 25 statement. We realize that this is an ever changing situation and we will be revisiting this decision again in April to determine if it needs to be adjusted as we move into another month. We will continue to monitor this decision monthly as this crisis unfolds in the Panhandle."