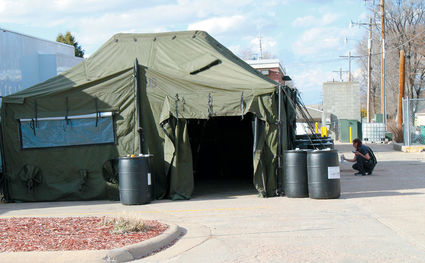 Kimball Health Services set up this triage type tent Monday on the east side of the hospital to help screen patients during the coronavirus outbreak if needed.

Editor's Note: Two more positive COVID-19 cases in Kimball County were announced April 1 after this article was published, a woman in her 40s and a man in his 50s. The Observer will continue to inform you on how this area is enduring.

Panhandle COVID-19 Unified Command announced the first positive case of corona virus in Kimball County on March 30. Panhandle Public Health District confirmed that a Kimball County man in his 50s tested positive for the coronavirus test. The individual is hospitalized and the case is travel-related from Colorado.

Contact investigation information was released shortly after the positive test announcement. The timeline begins on March 8 and concludes on March 28. According to Panhandle Public Health District the patient shared his Google map tracking and this pinpointed his activities within the community. In order to prevent further spread of the virus all close contacts are asked to self-quarantine for 14 days. Those close contacts will be monitored twice daily by public health officials for fever and respiratory issues.

According to a relatives of the man, his wife took him to Regional West Hospital on Saturday night because he was unable to breath, his breathing was shallow and rapid on the way to Scottsbluff. They immediately did a chest X-ray and determined he had pneumonia and were concerned about coronavirus; previous flu tests had been negative. He was tested for the coronavirus and the positive result came back on Monday.

According to his wife, the individual had displayed symptoms since March 21 and had been on antibiotics. For three days his fever was 100 degrees.

Members of his family are quarantined and unable to be at the hospital with him, but Tuesday morning the family received some good news from the hospital. Although sedated and on a ventilator, he did wake, turned over in his bed and the nurse told him he was in the hospital. His response was a thumbs up sign. The family is encouraged because his oxygen level is in the 90s as of Monday evening.

Although he resides in Kimball, the individual had been traveling to Colorado for work.

The close-knit family realizes that mamy people know who the individual is, but they asked that his name not be released. They are asking for prayers for his recovery.

Kimball Engel, Panhandle Public Health District Director, said: "Every protective measure the entire area has been working on for the past weeks including school closures, encouraging 10 or less people in public space like restaurants and bars, social distancing-staying 6 feet away from others, encouraging resident that have traveled outside the Panhandle to self-quarantine for 14 days, regular hand-washing, extra sanitizing and disinfecting measure, and monitoring symptoms of illness continue to be the best prevention to slow the spread."

One positive test result in Kimball County suggests the possibility that it has spread and more people will be diagnosed.

Precautions to take have become common knowledge for many. Practice good hand hygiene, including frequent and thorough hand washing and proper use of hand sanitizer. Avoid touching your face, including your eyes, nose and mouth. Be sure you have all needed medications and supplies on hand as if your were preparing for a severe snowstorm. Practice social distancing – no closer than 6 feet from others."

According to the release: "The DHM imposes an enforceable limit on public gatherings.  Among other steps, the DHM requires restaurants and bars in these areas to close their dining areas immediately and move to takeout service, delivery, and/or curbside service only until further notice.  Additionally, schools in these areas are directed to operate without students in their buildings.  This restriction does not apply to school staff working in school buildings.  It also does not apply to daycares that may be operated at a school per the Governor's executive order regarding childcare.