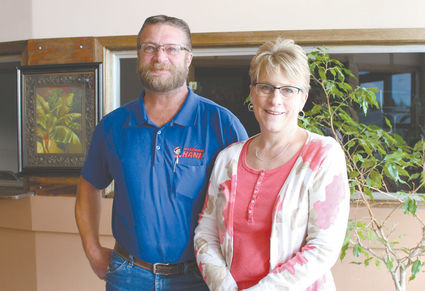 Rich Patterson and his sister, Dawn Moser, take a break while cleaning up the new Sagebrush. Patterson, Moser and their spouses have begun a new adventure at the former Kimball Event Center.

The Sagebrush, formerly known as the Kimball Event Center, is in the process of becoming a reality for some local individuals.

Rich and Kelli Patterson and Kevin and Dawn Moser received approval to purchase of the building in February and signed the papers March 3 to become owners of the old Kimball Event Center building. The Pattersons and Mosers said are excited about making a positive impact on Kimball.

How did it all come about? According to Dawn, she had always wanted to be an event planner and when they found out that the city no longer wanted to be responsible for the event center building, those ambitions went to a new level.

"My brother is always the one with the hair-brained ideas," she said "He asked, 'What do you think? What do we have to lose?' "

So now it is a done deal.

The Sagebrush has three carryover events from the city. Once those events are completed, the foursome will get really busy with remodeling and fixing up. Currently, they are simply cleaning and putting in a built-in bar. Everything will be done in phases.

Phase 1 will include updating both event rooms. The large event room will be called the Great Plains room and will be decked out with new chandeliers and the built-in bar. They will be offering wedding packages, which include in-house catering, a DJ and other amenities.

The next phase will include bringing back the lounge.

The final step will be restoring and completing the restaurant portion of the building.

The Sagebrush is planning a grand opening as soon as the event rooms and lounge are completed.

Rich remembered names of previous operations in the building, including the Brass Lantern, the Holiday, Kimball Event Center and now the Sagebrush.