Event Raises About $8,000 After Expenses 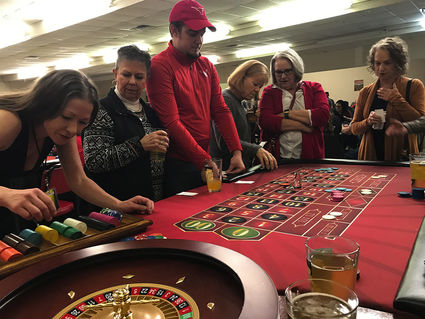 Players saw plenty of action Saturday at the roulette table during the Kimball Hospital Foundation's second annual Casino Night in the Kimball Event Center. The event to benefit the hospital drew about 180 people.

The Kimball Hospital Foundation’s second annual Casino Night at the Kimball Event Center drew about 180 people to support the foundation’s fundraising efforts to purchase a new heart defibrillator/monitor for use in the hospital emergency room.

The event raised about $8,000 after expenses.

Games offered by 16 total casino staff included blackjack roulette, craps and poker.  After three hours of gambling, participants traded in their chips for drawing tickets for $2,000 in cash prizes.