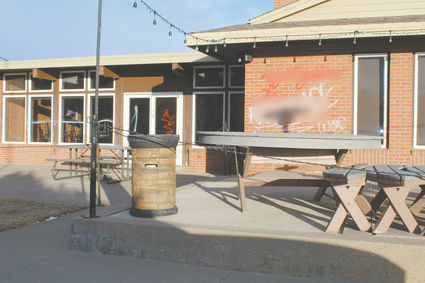 The Windbreak Bar and Grill building was vandalized on the front of the structure. Below: The Four Winds Golf Course pro shop also took a hit, and someone tried to kick in the door.

Vandalism raised its ugly head in Kimball on the first weekend of February – and the targets of the vandalism were very unusual and different.

Cantrell Funeral Home, along with the Four Winds Golf Course pro shop and the Windbreak Bar and Grill building, were areas hard hit with graffiti.

Kimball police said they have investigated, but no arrests have been made.

Keith Jones from Cantrell Funeral Home said that he was able to remove the "writings" on Sunday morning. He used Zip-Strip and a power washer to remove the spray paint from the bricks on the back side of the building and from sidewalks.

The Windbreak building also had "writings" and paint on the windows.

Golf pro Chad Wise received a call from the police about the Windbreak and while driving out to look at the closed restaurant he discovered that the pro shop was also hit by the vandals.

In addition to the paint job, Wise said they tried to kick in the pro shop door hence leaving their shoe prints on the door.

Wise said that the Park and Recreation Board is working with a foundation at the high school under the direction of Deb Fennell, which has offered to help with the cleanup. Wise and his wife, Jennifer, are very appreciative of the help.