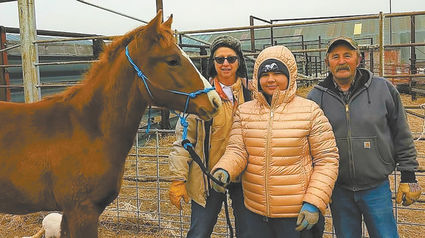 On a cold and windy winter day, Mattie DeBord from Virginia, center, picked up her weanling horse Charis from AQHA breeders Jo and Roger Timmerman.

The Timmerman Ranch is where a western Nebraska horse met a Virginia teenager.

The program that introduced the two is called the American Quarter Horse Association Ranching Heritage Young Horse Development Program. This program is intended to promote the Quarter Horse program and, according to the AQHA, "Youth in this program are engaged in the horse industry at a fundamental level that is both fun and educational."

This AQHA program takes horse breeders, such as the Timmermans from Kimball County, who donate a weanling horse – and a qualified youth is selected to be the recipient of the horse.

This is the second time that Jo and Roger Timmerman have participated in the program. Their first filly went to Iowa and now one to Virginia.

Jo Timmerman said, "We are trying to get our horses in the right hands. We want someone to do something with them and get their full potential out of them." Roger's brother and sister-in-law, Irv and Cindy Timmerman, have also donated horses to the AQHA youth program.

The Timmermans' horse went to Mattie DeBord, 15, of Bristol, Va. The DeBord family had never been west of the Mississippi, but on Nov. 1 they headed west to pick up the filly. They arrived in Kimball and spent the night with the Timmermans on their ranch.

"They were the neatest people I ever met," Jo Timmerman said. "Mattie was so excited."

The AQHA youth program is a competition between Mattie and the other 43 recipients of donated weanlings. The youth are expected to work and train the horse with the assistance of a qualified trainer.

In addition, they have record books, monthly reports, growth reports, quarterly reports, expense and income reports and have a Facebook page showing their progress, mattie_aqha_yhdp2020.

Mattie works with the filly, Charis or SJQC Arual Blanton about 20-30 minutes a day.

"Her attention span is really short," she said.

But Mattie bragged about how smart her filly is and then explained what she is learning from the program and competition.

"You learn how to become a better horseman, be patient, not rush learning and to be more clear with your body language," she said.

The competition will end in September with the winner earning a $2,000 scholarship – and all the youth keep their horses. Eventually, they will be ridden as 3-year-olds.

"I am very thankful for the Timmermans and the AQHA program for giving me this opportunity," Mattie said.