Mo Hanks Back On The Bench 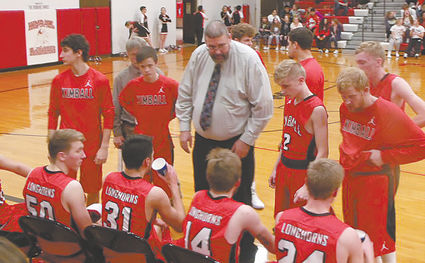 Mo Hanks is back in the saddle as Horns bench boss. In the early going, his team has a Jamboree win at Leyton and a split in the Kimball tournament.

It's been 13 years since Mo Hanks coached High School basketball, but he is back at it as the Kimball High boy's head coach.

Despite the years away from coaching, Mo knows the game and he knows the group of young men he is working with.

Coach Hanks coached this year's seniors when they were in the fourth through sixth grades in club ball.

As shown in last week's Kimball Tournament, he has his team playing well together with unselfish play, and when he gets a couple more players released from football injuries, this team has a chance to win a lot of basketball games.