Two Men In Other Vehcile Cited For Possessing Meth 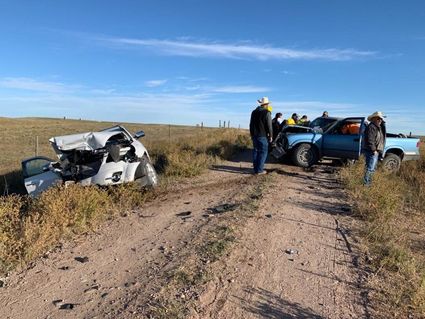 This is the Banner County crash scene where Kimball County Commissioner Daria Anderson-Faden and three Colorado men in a pickup were injured Monday morning in a head-on collision. The pickup driver, Edward Roberts, was cited for driving under the influence of drugs.

She was listed in good condition at Regional West Medical Center in Scottsbluff early Wednesday after suffering serious injuries.

The rural Kimball resident told the Observer that she was being treated for a dislocated right leg with a compound fracture and crushed ankle, and for a broken right arm and wrist. She said she also experienced a concussion and a bloody nose.

Anderson-Faden said the accident "just happened so fast" while she was checking water for her family's cows in the area at about 7:20 a.m.

She said she was driving northbound on a pasture road near County Road 6, abut 8 miles from Highway 71, when her SUV collided head-on with a southbound pickup occupied by three oilfield workers. All were from Colorado.

Two of those workers, Glen Koch and Michael Teter, were listed in fair condition early Wednesday at the Scottsbluff hospital. Anderson-Faden said a third man in the pickup was transported to another hospital.

That man was as the driver, Edward Roberts.

In a release Wednesday morning, the Nebraska State Patrol said Roberts and Teter were both discovered to be in possession of methamphetamine and Roberts was driving under the influence of drugs. The crash investigation is ongoing. 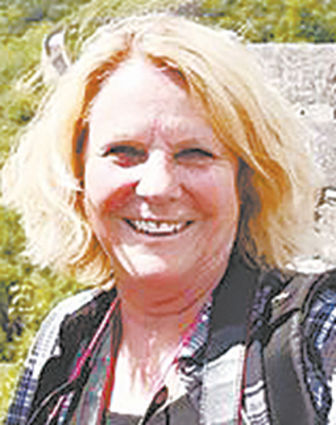 Anderson-Faden said she called her son, John-Robert Faden of Banner County, after the crash to inform him about the situation and call in an ambulance.

She said she expected to start her rehabilitation Tuesday while at RWMC but did not know how long she would be hospitalized. She said she was "feeling better."

It has been an eventful year for Anderson-Faden.

The former area schoolteacher joined the Observer staff as a writer several months ago and shortly thereafter was appointed to fill a vacancy on the board of commissioners, a position that she held before losing a re-election bid last year.

Her well-being was a community concern Tuesday. A steady flow of area residents contacted the Observer over the course of the workday inquiring about Anderson-Faden's condition.