HISTORY IN THE MAKING 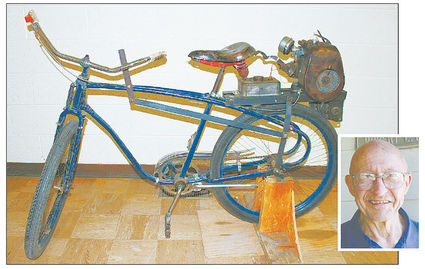 This is a copy of the motorized bicycle that Bob Mueller, also pictured, made in the 1940s as a 13 year-old farm boy. It's on display at the Plains Historical Society museum.

Although the outside of the Plains Historical Museum (the old high school) might look the same as it did in the 1960s or '70s, the inside is beginning to take shape.

According to Jowain Sherman, Plains Historical member and chairman of the sub-committee for buildings and grounds, it is a "work in progress."

Sherman provided a brief tour of the building and explained some of the changes happening at this location of the Plains Historical Museum.

The meager but ambitious crew of the museum have been working hard on a couple of new displays – a rather large display from a business right here in Kimball, "Joe's Press." The large linotype press was donated by Joe Hernandez; he acquired it in 1977 from a print shop in Gordon.

According to the information on the display, Joe used the GI Bill to learn the printing business. He then worked for the Western Nebraska Observer and the Business Farmer Publications, and eventually went into business for himself.

The linotype machine revolutionized printing. It was invented in the 1880s and helped to speed up printing by using "line casting," which placed the entire line of type for printing as opposed to letter by letter.

The linotype press was used by Joe for any and all types of jobs, from election ballots to butter wrappers for the local creamery.

Another local display unique to the Kimball area is a copy of a gas engine powered bicycle constructed in the late 1940s by Bobby Mueller. Bob said he was about 13 years-old when he made the bicycle.

He said, "We lived out in the country and I would bicycle to the neighbors, and they suggested I put a motor on it."

He continued, "Someone in Pine Bluffs made a unit similar to this and the neighbors copied it and I copied it also; it wasn't an original idea."

But for a 13 year-old kid it was an exceptional piece of work. Bob said he was always mechanical and loved working with tools.

The crew at the museum have rooms that will be dedicated to particular themes relevant to the history of the county. Theme rooms that are in progress include an early1900s kitchen with a wood burning stove and an icebox, a Westward Ho room, a fashion room, an early 1900s dental office with a foot pumping drill. Plans also include a room dedicated to the oil industry, which will explain and demonstrate the entire process and production of oil.

The Plains Historical Museum spent $69,000 for a new roof in order to preserve the old high school building and contents. They currently rent out three office spaces in the new section of the building, and they are looking forward to their yearly raffle. They will have 52 weapons, including shotguns, rifles and pistols to raffle off. 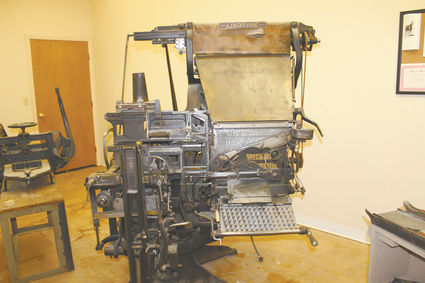 The old linotype press was once part of the Joe's Press business in Kimball and is now on display at the Plains Historical Museum.

Even though they do not have specific hours or tour times, Sherman said to call him anytime at 323-491-5463 because he loves to talk about the history of Kimball and the items in the museum.