Wise Sets School Record With Round Of 81 At Bayard 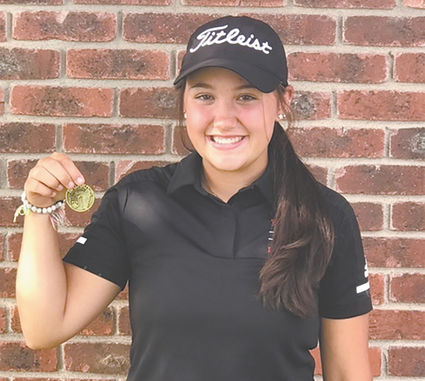 Kimball's Payton Wise holds up her first place medal she was awarded after winning medalist honors at the Bayard tournament. With her round of 46-36-81, she set a new Kimball High School record, bettering the old record of 82 she shared with Loni Janicek.

The Kimball High Girls Golf Team got the season underway at the Sidney Tournament this past week on a Tuesday and came right back to play at Bayard on Thursday.

Sophomore Payton Wise brought home medals from both outings, with a 9th

Coach Katie Culek had a full team of 4 girls for the Sidney Tournament and her Lady Longhorns finished 6th in the team standings with 451 with Miss Wise shooting a round of 48-43=91 to earn her 9th place individual medal.

Harly Hiltibrand of Ogallala was medalist to take top individual honors with her round of 75 edging out Emily Krzyzanowski of Scottsbluff who shot 76. Not a bad first time out showing by Kimball against all of the larger schools. Coach Cule!uws without senior Carli Wurdeman at the Bayard Tournament and with only 3 girls could not battle for any team honors. Without a doubt they would have been in the running for some team honors with their full team, but Wurdeman had an obligation that prevented her from competing. A HUGE day for Payton Wise as she won the Bayard Tournament for medalist honors with her amazing round of 46-35-81 to win by 13 strokes over second place Maddie Pelton of Chadron who shot 94. Payton certainly didn't start out like she was going to shoot her best round ever and set a new Kimball School record, as she triple boggied her first 2 holes and shot 46 on the front nine.

What a comeback though as she shot 1 under on the back nine with her 35, and she did it under pressure as she had been checking her score card and knew with 2 holes remaining if she could birdie land par she could break the old record of 82 she shared with Loni Janicek,and herself. She didn't get the birdie on her 17th hole, but she did get the par. On her final hole, a par 4, she had a good drive and a good approach shot and then drained the putt for the needed birdie!

Last year as a freshman, she tied the 20 year old record that Loni Janicek

Coach Culek also has 3 new golfers on the team who just took up the sport this season as freshmen but said, "These girls are not ready for tournament play yet, but I am going to give them 9 holes of play at our own tournament to give them a taste of what it is all about."

Coach Culek was referring to the Western Trails Conference Tournament that Kimball hosted this past Tuesday. The Kimball ladies are back in action today

(Thursday) at the Creek Valley Tournament in Chappell.