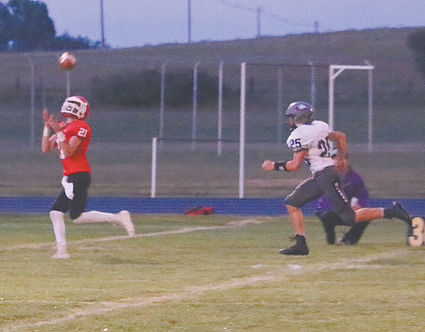 Kimball wide receiver Jacob Withrow gets a few steps on his opponent and keeps his eye on the ball in last Friday's season opener.

The Kimball High Longhorn Football Team suffered a 62-20 loss to the visiting Garden County Eagles in the season opener for both teams in 8-man football action this past weekend. It took parts of two days to get the game completed as the contest was called off Friday evening due to lightning delays that wouldn't go away.

After a 30 minute delay to the start of the game Friday, the game got underway at around 7:30 p.m., but was handled again due to lightning with 4:15 remaining in the first quarter of play. While the Administration waited to see if the weather would clear, a final decision...