They Go Together Perfectly In Kimball & Banner Counties The Kimball-Banner County Fair got off to a quick start on Saturday with the archery competition and concluded with the Livestock Sale on Monday, Aug. 11. Between Saturday and Monday, about 150 4-H kids showed their skills in everything from baking cookies to showing swine.

Throughout the week, an impressive group of area youngsters showed why 4-H kids are successful in many other endeavors.

Colts and Fillies leader Lavella Reher knows what horse 4-H does for the kids.

"Oh, confidence building, they have so much to learn, taking care of the horse, feeding, sweating on a hot day in practice, they work at it," Reher said.

And anyone who knows her would agree with her.

"And I don't give them one bit of sympathy," she said.

Talk to any of the parents or kids and they sing the praises of their leader.

"She pushes hard enough to get them to do things but not too hard to break them," one parent said. "She expects those kids to do their best when they are in the ring, but if they need help, she is right by their side."

Barrels are the favorite event for most of the horse 4-H kids, but the toughest event is pleasure trail. They must practice, keep calm, not become frustrated and make their horse go through a series of obstacles. Trail is a test of true horsemanship.

On Thursday, 4-H kids showed dogs and small animals like rabbits and chickens. Not only do the kids have to show the animal, but they must have extensive knowledge about the animal. They also must learned to look the judge in the eye, shake their hand and tell them about their animal and answer questions.

Thursday afternoon created a challenge for the parents and youngsters as over an inch of rain fell during sheep, swine and cattle weigh-in, and and the lightening strikes on the fairgrounds made everyone take notice.

The swine were the center of attention on a scorching hot Friday morning, followed by sheep and goats.

4-H claims that it "empowers young people to be true leaders. True leaders are young people who have confidence, know how to work well with others; can endure through challenges; and will stick with a job until it gets done."

Young Britton Culek was a perfect example of a young gentleman enduring challenges and sticking to a job until it was done during the sheep show. Britton's 139-pound lamb gave him a tough time during the market show-twice the lamb got away from the eight year-old and he was forced to eventually use a halter to continue, but his determination and endurance paid off as he was awarded Reserve Champion market lamb. 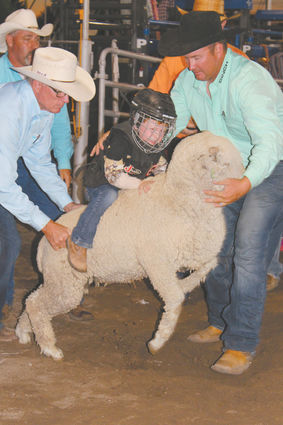 Kimball County mutton buster Theo Perry grits his teeth in anticipation of what is to come. Theo was the first of the mutton busters at the PRCA Rodeo. Quincy Boettcher won the mutton busting on Saturday evening with a ride clear across the arena.

Livestock judge Bill Dalles from Upton, Wyo., used the opportunity to praise and provide constructive remarks for all the 4-H kids and their animals. The judge was excellent, taking time to explain to younger members how to improve their showmanship.

Banner County seventh-grader Isaac Olsen claimed a Grand and Reserve Champion Rate of Gain on his market beef. He thought back back over his experience this year.

Finally, the Kimball-Banner County Fair concluded on Monday with the Livestock Sale.