Harvest Under Way, But Not In Full Swing 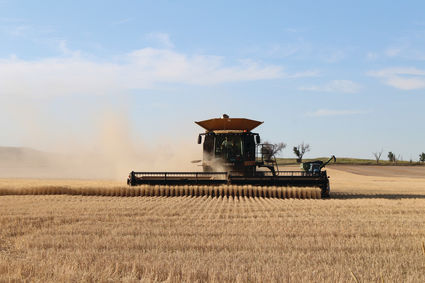 Gene Golding was hurrying around last Friday, but he said harvest was "not in full swing yet." He said that there is quite a bit of green wheat still out there.

Dumping a load of wheat in his semi, Justin Perry said they were cutting wheat southeast of Kimball. He said he has been "pleased so far" with the wheat. He is assuming it will take two weeks if the weather cooperates. He said the protein was average and the moisture good.

The semis makes harvest quicker because, Perry said, that the trailer held about 1,000 bushels of wheat.