Many Golfers, Many Miles At Vince's Corner Tourney 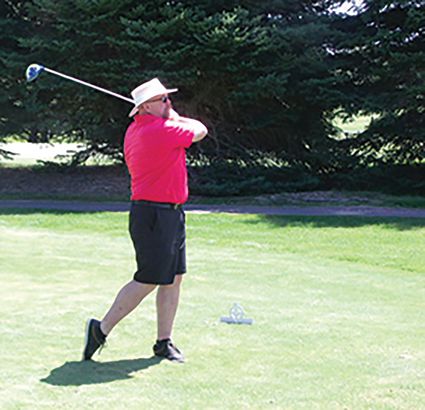 Vince Heeg travelled from California back to his hometown to play in the Vince's Corner Scramble and wound up the No. 1 Division D player. He shows his follow through form off the first tee box Sunday morning.

The weather was good, the golf course was great, and the 10th annual Vince's Corner ABCD Double Draw Scramble was termed a huge success this past weekend.

A total of 128 golfers made up the 32 four-person teams who participated and the majority of the golfers are repeat entries who come back year after year. It is like a homecoming for many who travel great distances to participate.

Prize money was handed out to the top six teams on both days, and the top 3 teams arrived at by finishes of both days, were rewarded for the final results payoff.

The winning team on Saturday, listing the players in order from A through D, was Matt Coon, Justin Markheim, Bob Culek, Jim Eddington with a handicap round of 58.825.

The winning team from Sunday play was Brady Mitchell, Cory Huston, Gary Monson, Kenny Fritch with their round of 57.000.

Play from both days determined the overall winners in the final results division with 3 places awarded prize money. In the A division, the top three in order were Steve Schwab, Brady Mitchell, Brock Ehler.

In the B player division the top 3 were Cory Huston, Justin Markheim, and Jeff Squire.

Along with the team results, the players were also playing for skins and only one skin was paid out both days with the team of Ron Robles, Toff Maghinni, Rick Raffelson, Steve Wistrom. winning on Saturday with their Eagle on hole number 8. The lone skin winning team on Sunday was Eric Freeburg, Doug Maley, Pat Cordell, Bruce Tjsvold with their Eagle on hole number 7. There were also many flag prizes and some terrific raffle prizes handed out both days but Henry Heeg, the man in charge said there were too many to mention. Henry did say "Please thank all of the golfers who participated, and please thank Chad (Wise) and Jeremy (Williams for all the work they did to

make things go smooth". Chad of course is the Pro at our Four Winds Golf Course and Jeremy is the course superintendent who keeps the course in such immaculate condition. 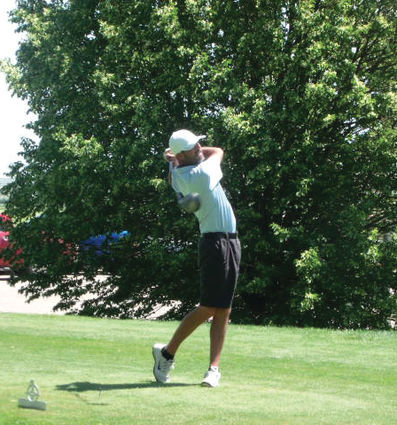 Tyler Garrett watches his drive from the silver tees on No. 1. Tyler is one of Kimball's top golfers and was an A-Division player with a very solid 2 handicap.

Henry also said that this year they raised a total of #1,351 from the betting holes that he will contribute to the USO. In years past they have given money raised to the Wounded warrior Association, but varied a bit this year. Henry also said at this time he plans on holding the 11th Annual tournament next year and it will go into the planing stage right away.

I got out to the course and talked with a lot of the golfers and enjoyed the many comments about what a wonderful golf course Kimball has and how well groomed it is. It is so encouraging to see how much they enjoy the event. A than you goes out to Henry and the entire Heeg family for holding the Vince's Corner ABCS Double Draw Scramble each year. And also, a thank you to the guy in charge of the weather for holding off the stormy stuff until play was completed.