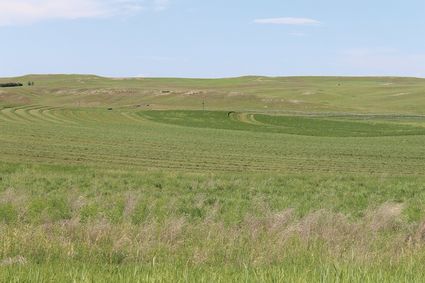 Moisture has been in abundance on farmland across Kimball County this year.

As spring turns to summer, area farmers are working from early morning to sundown in the fields. They are rushing around trying to get as much done as possible and hoping to minimize breakdowns.

Each area of Kimball County has its unique characteristics, but it appears this year all areas of the county have had an abundance of moisture.

Individual farmers have provided their view on what is going on in their "neck of the woods."

Farming a wide area of Kimball County from north of Bushnell to ground north of Dix-Byron Wilke reported they are in the process of swathing and baling their alfalfa.

Their alfala and wheat got hailed early in the season-in May. He said it didn't really hurt the wheat.

"With the cool weather and moisture in June everything is about three weeks behind." The corn should be "knee high by the 4th of July." Byron said he thought it would be "about shin high."

Wilke has both, dryland and irrigated corn, and it also is two weeks or more behind in growth.

He did get his corn in on time but the "ground temperatures" were so cold that the corn didn't germinate like it should have and the corn is somewhat behind. He is currently spraying his corn.

Pleased with the pastures, he said "pastures look great." He hasn't had any hail that he has noticed but hated to talk about hail.

And a Kimball County farmer, who asked not to be named, farms every direction out of Kimball and said his wheat was "super."

He was guessing that he would not harvest anything until after July 20, although isolated places might be ready earlier.

His hail story was similar to others in that they had some but not enough to do much damage.

While many farmers were not able to get their corn in on time, this farmer stated that "we got lucky" and got it in and got our millet in on time but "it was by the hair of my chinny, chinny, chin."

The farmers are looking forward to some hot, growing weather as they continue to work. Harvest is really just around the corner.