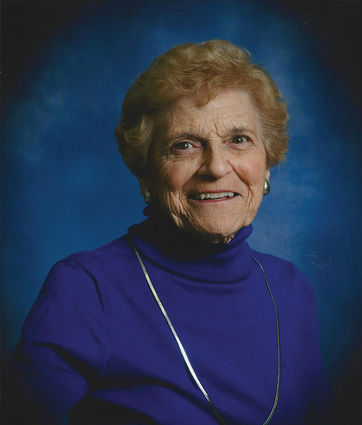 Claire Constance (nee LaPlante) Tritt was born in Lawrence, MA. on August 8, 1924.  She lived and worked in Lawrence until 1946 when she took a leap of faith and married Myron V. Tritt, a returning, midwestern World War II soldier whom she met at a USO dance and corresponded with throughout the War.  Myron planned to build a family and a business in the town where he had grown up, so Claire left behind family and friends, but not her Boston accent, to make a life in a town which, at the time, had no traffic lights. One of her first experiences was an introduction to a shivaree, a boisterous event celebrating a new marriage western style, that Claire did not find at all amusing.

But over time she became a strong Kimball supporter and was proud of the town's progress.  She learned to play golf on sand greens and among the rattlesnakes.   She learned to play a mean hand of bridge and was part of an allstar bridge club that met every Thursday for decades.  She continued both activities into her nineties.

After raising her three children, she worked for many years at Flower Haven, happily adapting to the working world.  She also found time to attend daily mass at St. Joseph's Catholic Church and volunteer at the Kimball hospital and Manor.  Hers was a life lived long and well.

A memorial service will be scheduled later in Kimball.

Memorials may be directed to the Alzheimer's Foundation of America and Kimball County Hospital Foundation.