Kimball All-Stars Back On Court 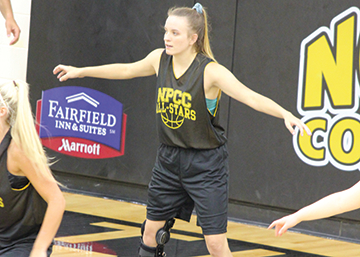 Kate Reader is on defense during the all-star basketball game at North Platte Community College in North Platte this past Saturday.

Kimball High grads of the 2019 class were preforming again this past weekend in All Star events. Kate Reader and Izaac Reuter played in the select Mid Plains Area All Star Basketball games held Saturday evening at the College in North Platte.

Kate was on the winning Black team that won over the Gold team 65-37 and contribute nine points along with playing an overall good game with her rebounds, defense and assists.

Izaac ended up on the Gold team that lost to the Black team 76-74 in overtime. He scored five points with one trey but had an outstanding night with many rebounds and assists plus steals and solid defense. 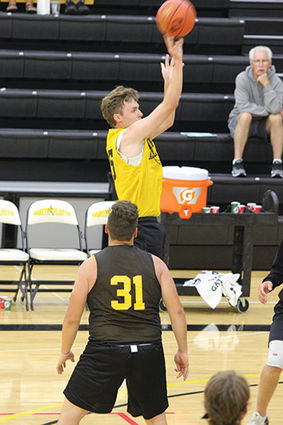 When asked if he enjoyed this All Star experience as much as the Panhandle Prep All Star game he was involved in last weekend in Scottsbluff, Reuter said, "I enjoyed the game at the Cougar Palace more simply because I was playing with kids I knew better and were friends with. However, the game at North Platte was a lot more competitive and not as relaxed or casual as it was in Scottsbluff and that made it fun," he said.

Reader also said she maybe enjoyed the Scottsbluff game more getting to play with, and against, players she has known for a long time.

"I liked the North Platte game however because I did get to meet and play with the girls I didn't know and that was fun," she commented.

Now, after the back to back weekend All Star contests, it looks like the basketball careers of both Reader and Reuter are over, but both said they will be involved with intramural athletics as they move into their college days.

Reader will enroll and study at the Colorado School of Mines pursuing an engineering degree, while Reuter is headed to the University of Wyoming to obtain a degree in Business and Finance.